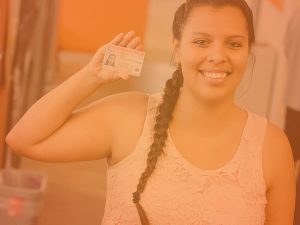 There is a lot of concern that the incoming Trump administration will rescind President Obama’s “Deferred Action for Childhood Arrivals (DACA). President Obama used his executive authority to create DACA after the U.S. Congress failed to pass the DREAM Act, legislation that would have created a path to legal status for young people brought to the United States illegally as children. DACA’s requirements are stringent. To be eligible one must have been brought to the U.S. by a parent before the age of 16, be enrolled in or graduated from high school or served in the military, and have no felony or “significant misdemeanor” criminal convictions. Since DACA was created using executive authority, a new executive can change or eliminate the program. Compounding this is the fact that to enroll in the program people must register with the government. So, the new administration will have a ready-made list of undocumented immigrants if it choses to follow through on promises of mass deportation. This eventuality is unlikely, but it’s difficult to predict.
·
Potential changes to DACA would be felt here in Charlotte, where our Sheriff is a participant in the federal 287(g) program. This program provides federal funds and training for local law enforcement to be immigration officers. Since the Sheriff runs the jails, under this program anyone brought into the jail is checked for legal status. Deportation priorities are set by the president, and under the Obama administration these priorities do not include young people with DACA. But, this could very likely change with the new administration. The only way to ensure that new priorities are not injurious to our local immigrant community is to rescind 287(g). In the new year our advocacy group should pressure the Sheriff to pull out of 287(g).
·
There are bipartisan discussions in the U.S. Senate about introducing a bill in the new year to codify DACA into U.S. law. Republicans Lindsey Graham (SC) and Jeff Flake (AZ) are supporting the initiative, but it’s not clear whether there is majority support in the Senate for such a bill. And, the legislation would have an even more uncertain path in the House. We should encourage our group to call their Senators and Representatives urging them to support this type of legislation. At this point, the support is general. As specific bills are introduced, we can follow up with information about supporting them.
Mayors from major U.S. cities are working proactively as well. Over 50 signed a letter to president-elect Trump requesting that he continue DACA. The letter cites the economic consequences of deporting undocumented young people, estimated at $444 billion in GDP over 10 years and almost $10 billion in tax revenue.(http://www.nytimes.com/reuters/2016/12/07/us/politics/07reuters-usa-municipals-sanctuary.html?_r=0).
Share this...