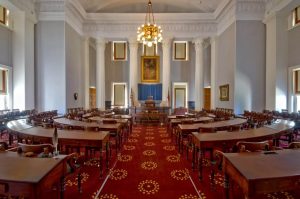 House Bill 1086 was introduced on May 10, 2016.  It passed first reading and was referred to the Judiciary and on to Appropriations all on 5/11/16.  If approved the bill would “allow local governments to request a moratorium on refugee resettlement activities, require local governments to hold a public hearing prior to notifying the NC refugee assistance program of its available capacity to settle additional refugees, and prohibit local governments from requesting the settlement of additional refugees within their jurisdiction until they have documented they have the capacity to settle additional refugees and have held a public hearing on refugee resettlement.”  The bill is significant for a number of reasons.  Governor’s, legislatures, and municipalities do not have the jurisdiction to “ban” refugees from entering their states/municipalities.  However, these powers can create bureaucratic structures that are so cumbersome, such as suggested in HB 1086, that refugee agencies would not have the time, financial or human resource capability, or legal capability to carry out their work.  The process of settling refugees is fairly dynamic and does not work along set time lines.    Agencies like CRRA or Catholic Charities are often given short notice about new arrivals and must be ready to work quickly to get individuals and families settled in homes and connected to the resources they’re gauranteed by law.  To have this sort of layered bureaucratic process in place could hamper, in fairly significant ways, the work of these agencies.  A link to the full HB 1086 is included here:

Although the bill is on hold for now, the rapidness by which it passed through these early stages suggests future approvals could likewise move quickly given the bill was proposed entirely by Republicans and the legislature remains Republican.