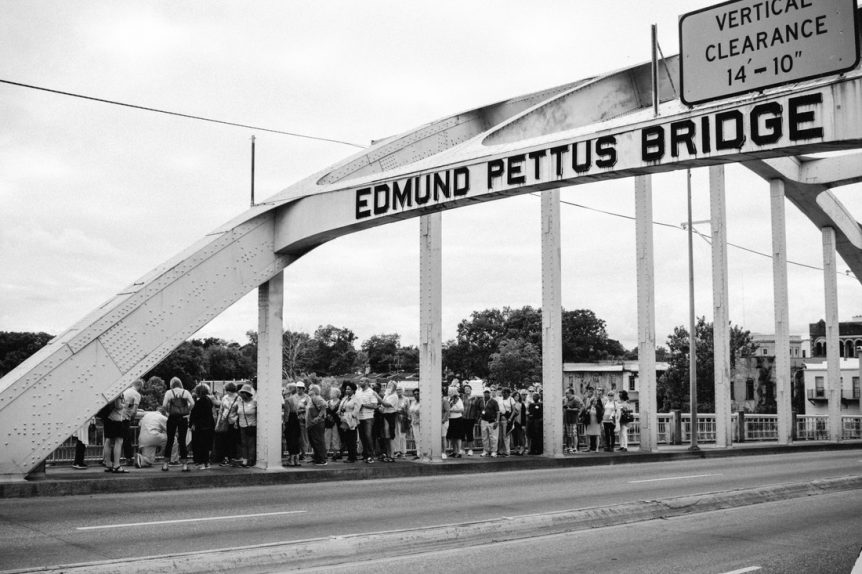 Racial justice is preoccupying many religious leaders. As in too many other cities across the country, protests erupted in Charlotte last fall following the fatal police shooting of an African-American man. As clergy we are called to help our congregations who want to deepen their understanding of systemic issues of racism. Some of this education can occur inside our sanctuaries and social halls, and some requires building relationships across racial and religious differences outside our synagogue walls.

Dr. Martin Luther King and Rabbi Abraham Joshua Heschel learned that lesson well. They first met on January 14, 1963 at a Conference on Race and Religion in Chicago where they both were speaking and coincidentally quoted the exact same text from Amos (5:24) calling for “…justice [to] roll down like waters.” That moment sparked a friendship that would move them to stand together in countless other cities and settings and would inspire generations of advocates for justice to embark on a similar path of civic engagement.

This model of building relationships across racial and religious differences led me last week to participate in a Deep South pilgrimage with two churches (even though I had just visited Alabama for a Civil Rights trip with a group of women from the Jewish Federation three months before). I traveled to Atlanta, Selma, Montgomery, Birmingham, and Memphis with Charlotte’s Mayfield Memorial Missionary Baptist Church which is a predominantly African-American church and Myers Park Baptist Church, a liberal largely white church. The clergy who lead both these congregations are my partners in social justice work of our city. When I first spoke of joining them, my colleagues immediately acknowledged the legacy of Rabbi Heschel and the historic place of Jews in the fight.

What was it like to go on a Deep South pilgrimage with a black and a white Church?

It was a journey of connection and building relationships. Each morning on the bus we sang freedom songs and pondered questions with a new person sitting next to us: “When was the first time you learned about the Civil Rights Movement?” or “What calls you to be here today: scripture, story or relationship?”

It was a journey of understanding another’s memories of pain. As we drove through Lowndes County, Alabama, through which the Selma-to-Montgomery March passed, Dr. Peter Wherry, Pastor of Mayfield, asked us to reflect on the fact that every tree could have been the execution place of an African-American soul, every stream could be where someone fled in fear seeking to clear the scent so that they would not be found by the police and their dogs chasing them, and every field could have been that of a sharecropper or a tenant farmer working for no wages. When we visited the museum capturing the tent cities where these sharecroppers lived after they had been kicked out of their homes and off their fields for registering to vote, the items on display there were not history but our African-American travel partners’ memories.

It was a journey of coming to understand each other’s vision for justice. Together as African-Americans and whites we crowded into the Dexter Avenue Baptist Church Parsonage where Coretta Scott King and her husband lived and their first two babies were born. As the Civil Rights Movement gained traction, the phone calls of hate multiplied– sometimes thirty a day. We saw the remains of where a bomb hit their porch. We stood in the study attached to King’s master bedroom where he wrote. We crowded into the kitchen where Dr. King had a midnight moment of his fear leaving him knowing that whatever his fate would be, his mission of working for equal rights was his calling. Standing together, we recognized that the journey to justice was long and hard then and remains so today. It requires faith.

In some Civil Rights museums, the presence of Jews who partnered in the pursuit of Civil Rights in the 50s and 60s was present, and in other museums their images and voices were painfully absent – written out of history. I shared stories of Jewish freedom riders, the role of our Religious Action Center where critical Civil Rights legislation was written, the thousands of Rosenwald schools established by the Jewish philanthropist in partnership with African-American Southern communities, and the work of Jewish refugee professors at historically black colleges, opening the minds of some of the travelers to history they never knew.

Racial justice is high up on the agenda of many liberal religious denominations in our country. Yet our vision for equality and equity cannot be actualized in isolation – collaboration is required. Social justice and religion happen on the road — in relationships on the streets, in city halls of the community, even in courtrooms where cases are tried. The ladder of congregational civic engagement is rooted in relationships. The rungs expand to include social action, education, philanthropy, advocacy, organizing and being part of a larger movement. Each rung offers our congregants a Judaism that is expressed not only through uttering prayers in the pews but that is lived in the world.

NOTE: In the coming year, the Stan Greenspon Center for Peace and Social Justice will continue addressing refugee issues. This coming fall, we will offer a Racial Justice Advocacy Educational Program.

Above photo by Sarah Ann Photos