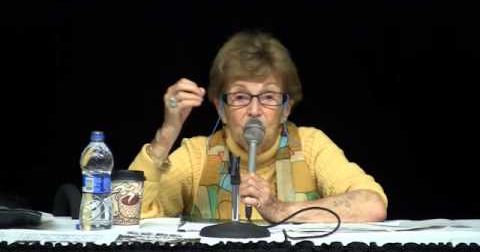 As part of Queens University’s Interfaith Week, the Stan Greenspon Center for Peace and Social Justice will be hosting an evening with Holocaust survivor, Dr. Susan Cernyak-Spatz.   There are fewer and fewer opportunities to hear from Holocaust witnesses, so we hope that you can join us for this special evening as shares her testimony and answers your questions.

In 1936, her parents moved to Vienna where the family business had a branch. Hitler’s occupation of Austria in March, 1938, put an end to her existence as a carefree adolescent by forcing her and her family to become refugees in Prague, Czechoslovakia, leaving all their possessions behind in Vienna.

Her father managed to leave Czechoslovakia on August 31, 1939, for Brussels, via Poland where he was able to outrun the German invasion. She and her mother were trapped and eventually, in May, 1942, deported to Theresienstadt. Upon her arrival there, her mother was selected for a further destination “East” which, although she did not know it, meant certain death.

Cernyak-Spatz stayed in Theresienstadt until January, 1943, when she was sent on transport “East” which by that time meant Auschwitz. Due to the fact that Auschwitz-Birkenau was a labor-cum-extermination camp, she was selected for “outside work” and managed to survive the first critical two months in which prisoners in Birkenau either survived typhus and the other many diseases running rampant in the camp or died. In the course of the two years in which she was in the camp, she learned the rules of survival which included an “inside job” to avoid the daily selections, marching to and from backbreaking outside work, or the only alternative, going into the “gas.”

Cernyak-Spatz managed to find connections, a job, and relative security within the administrative hierarchy of Auschwitz-Birkenau.

In January, 1945, she worked in the so-called “Kanada-Kommando” where the transports’ personal property were sorted and sent to Germany.

Auschwitz-Birkenau was evacuated, ahead of the advance of the Russian front, in January, 1945. The prisoners were sent on the “death march” which only a small number survived.

Cernyak-Spatz and her fellow workers from the Kanada Kommando were sent to KZ Ravensbrueck, the largest women’s concentration camp in the Reich. There they stayed until the end of April, 1945, at which time they were again deported, this time to the West to escape the Russian advance.

Liberation occurred in a small village in northern Germany, near Schwerin, by a battalion of the eighty-second Airborne which had just occupied the little village.

After the Liberation, she worked for the American Counter Intelligence Corps as an interpreter, and then for the British Military Government, also as an interpreter. She was reunited with her father in August, 1945, in Brussels. She married an American GI and came to America on July 4, 1946. She has three children and continues being active in the field of Holocaust studies which she has also presented in Germany in yearly lectures for over a decade.