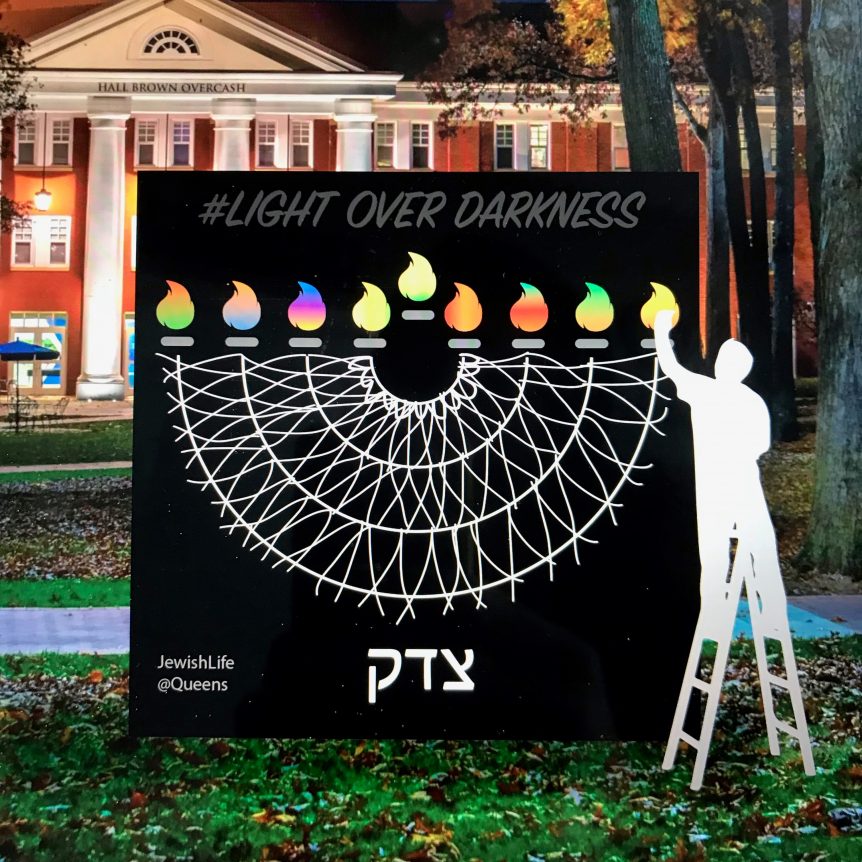 Charlotte learned the power of street art this summer as twenty-two artists came together to paint a “Black Lives Matter” Mural on South Tryon Street between East 3rd and East 4th Streets.  Each letter was its own piece of art expressing the artists’ messages combatting racism, illustrating protest and pain, promoting healing and hope. In the midst of global racial justice protests, the work aimed to inspire social change.

Jewish street art brings Jewish content to the public eye and like secular street art is democratic — accessible to all.  Yitzchok Moully, dubbed the Pop Art Rabbi (whose #WeAllBelong mural was created with Charlotteans at Chabad’s Friendship Circle) describes Jewish street art as “bringing it to the people.  All my work has deep kabbalistic meaning.  It’s a way of communicating. It’s not in a museum and not closed off anywhere. It’s just there for anyone to connect with.”

This year Jewish street art will make its way to the Queen City — to 1900 Selwyn Avenue on the edge of the Queens campus. Acclaimed Jewish street artist Mike Wirth is one of eight artists in eight cities taking part in this collaborative Chanukah street art effort. #lightoverdarkness is the theme. Each night, community leaders in each city will add color and light to the flames of the candles on their city’s respective mural.  Each night a different artist and city will be spotlighted. Artists include Yitzchok Moully (New Jersey), Mike Wirth (Charlotte), Olivia Guterson (Detroit), Bareket Kezwer (Toronto), Adam Podber (Atlanta), Shlome Hayun (Los Angeles), and Hillel Smith (DC).

Yitzchok Moully conceived of the idea of bringing a Chanukah menorah mural to the public eye in 2018, in the aftermath of the Tree of Life Synagogue shooting.  In an effort to bring healing and hope, Moully painted a massive Chanukah menorah mural on both sides of a thirty-foot RV and drove it around New York and New Jersey. Each night in varied locations, community leaders painted a flame as residents added color-filled messages of hope to the work.  In December 2019, in the aftermath of another tragic shooting at a Jersey City kosher grocery store, Moully again sought to bring light to darkness through community art. He painted a second menorah mural on a prominent Jersey City wall and again he invited community members to add their words of healing. 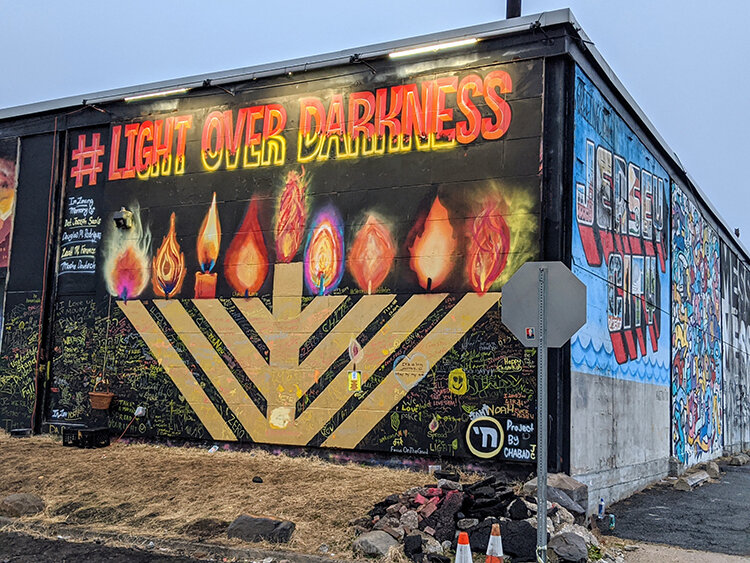 This year, Los Angeles based street artist Hillel Smith transformed Moully’s concept taking it to a national stage. The two met last year when Smith planned the first ever Jewish Street Art Festival which took place in Jerusalem. Smith, while engaged in international public art projects, discovered street artists “all toiling in their own corners of the world.” In the Fall of 2019, he brought ten artists together to create ten collaborative artworks across Jerusalem.

Mike Wirth, Charlotte’s acclaimed Jewish street artist and Queens University of Charlotte professor of art and design, received an early invitation to the inaugural U.S. menorah project. Wirth’s design for the menorah mural honors the lifework of Jewish Supreme Court Justice Ruth Bader Ginsberg who recently died. The menorah, comprised of RBG’s dissent collar with the Hebrew word “צדק” (justice) painted below, will be installed during the first week of December. Each night during Chanukah at 5:30 pm, a different community leader will paint the flame and lead a brief program that can be viewed on the Stan Greenspon Center’s Facebook Live feed. Community members are invited to stop by and take selfies in front of the mural and post on social media, adding their own hashtags to the national hashtag #lightoverdarkness. 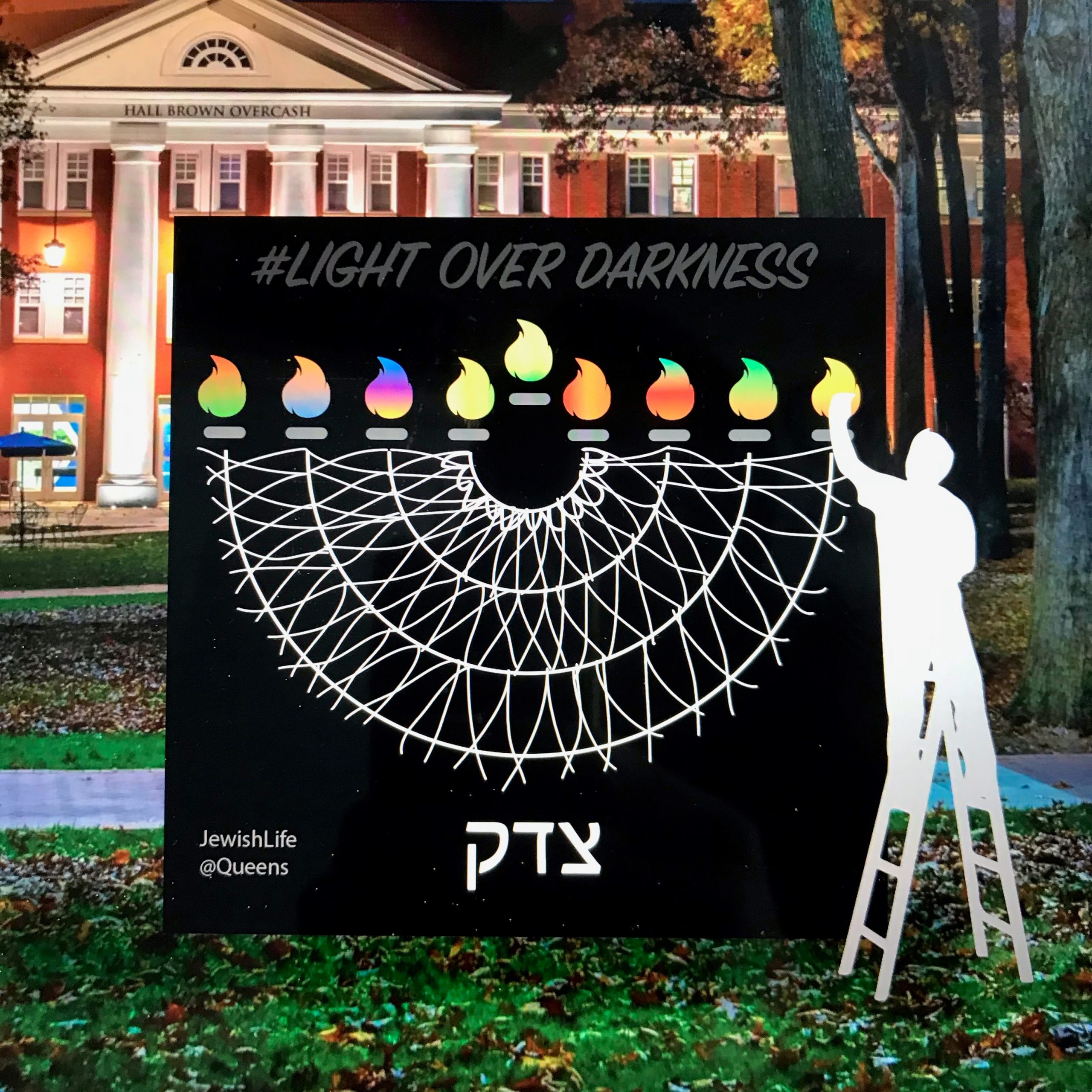 Professor Wirth is partnering with art student, Queens Hillel President, and Senior, Morasha Winokur, to actualize the project.  Morasha, a triple major in Art History, Arts Leadership and Administration, and Studio Art, is spending eighteen hours a week this semester in the ceramics studio as she works on her Senior Thesis Show exploring Judaica. She sees this mural as bringing her passions together adding, “It is also the perfect way to celebrate five years of Hillel at Queens.”

Winokur chose Queens, in part, because she wanted to help create the emergent Jewish Life program. Now, with a fulltime Director of Jewish Life, Talli Dippold, a Campus Rabbi, Judy Schindler, and a Jewish art professor, Mike Wirth, she has more support in expressing her identity than she ever could have imagined. Winokur remarked, “I am so proud. Since the time first time I visited Queens, my school went from having one Jewish student to having an established and solid program and now, through this project, I get to share the light of my Jewish pride and creativity with Charlotte.”