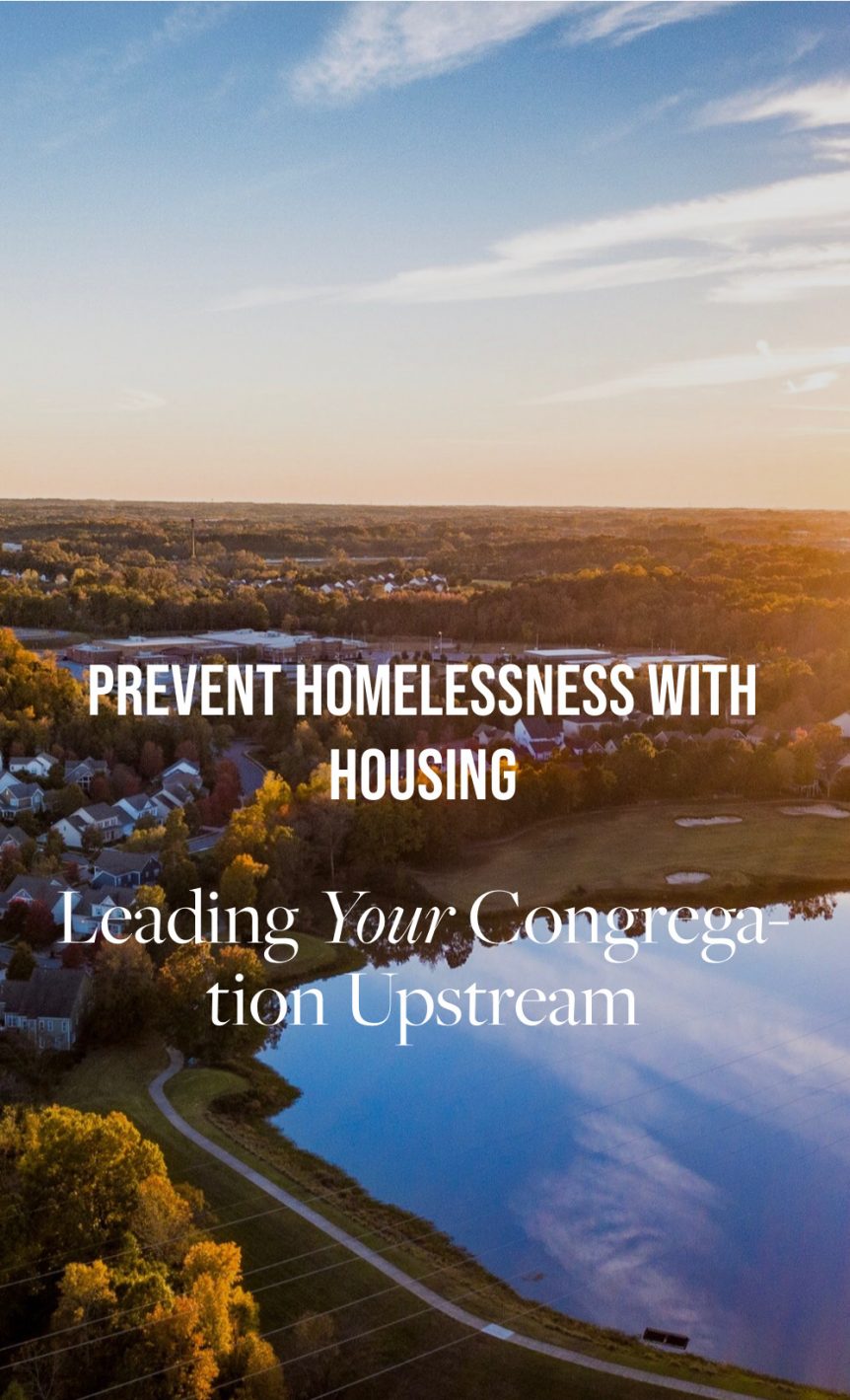 By Judy Seldin-Cohen
How many of us have made a casserole for a homeless shelter? Donated socks or travel-sized toilet articles?  Volunteered to serve a meal? Written a generous check? These are acts of righteous giving, honored by all faiths and organized by many.

Yet we have the power to do so much more — we as individuals, and especially we as congregations.  Consider the impact if houses of faith not only fed the homeless, but provided them homes. What if congregations donated not only emergency items, but also vacant land?  Could religious charity include checks both to support homeless shelters and to subsidize affordable homes?

drowning in the river of homelessness

A parable from many faith traditions tells about a villager walking along a river who sees someone drowning in the current.  The villager courageously jumps into the water and rescues the stranger. The next day, another brave villager saves another drowning stranger.  Word spreads, and the rescuers are hailed as local heroes. Soon a schedule is established for volunteer lifeguards along the riverbank.  A town meeting is called to discuss raising money for rescue equipment and researching best practices in lifesaving techniques.

Finally, someone stands up and says, “Maybe we should travel upstream, and see why so many people are falling into the river.”

Congregants across different faiths have been generously and courageously serving as lifeguards for the homeless in their communities. These lifeguards are working more and more shifts because so many are truly drowning in the river of homelessness.

But now some faith communities are continuing this important work and also traveling upstream. The people that they are finding at risk of falling into the proverbial river include those coping with rents that absorb half or three fourths of their monthly income – just one car repair or medical bill away from losing their housing.  They include low-income seniors and those recently released from prison, LGBTQ young adults and moms with multiple evictions, minimum wage workers and people with disabilities – all people with barriers to stable housing.

land and funding: your resources to travel upstream

Congregations can prevent people from falling into the river of homelessness with two kinds of resources – land and funding.  Congregants with the leadership of clergy can assess the resources of their congregation along these simple dimensions:

Does the land that your house of faith occupies have enough unused space to hold a house or two, or maybe a low-rise building?  Or perhaps you already have on your property an under-utilized education building or a house that could be repurposed?  Maybe you do not have any on-site options, and your congregation could investigate off-site alternatives.

Some, Sizable, or Signature Funding:

How much funding could your congregation reasonably raise for affordable housing over three to five years?  Is it something between $1,000 and $25,000 — some funding?  Could you raise more than $25,000, or even $250,000 — sizable funding? Or do you have the capacity to muster over a quarter million dollars — signature funding?

Six congregations shared their journeys upstream at “Faith in Housing,” a workshop sponsored by the Stan Greenspon Center of Queens University of Charlotte. These six congregations represent examples across the dimensions of land and funding capabilities: 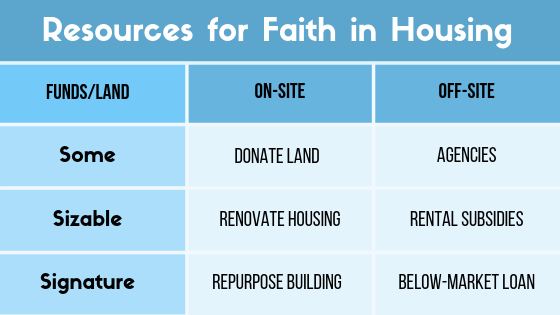 Three congregations exemplify on-site options:  donating vacant land, renovating existing housing, and repurposing an education building.  The funding that these three churches are amassing for this on-site work ranges from some to sizable to signature:

Three off-site options offer upstream choices for congregations which lack land, but can muster some, sizable, or signature funding:

Over the coming weeks, look for blog posts at FaithInHousing.org detailing each of these options.  Meanwhile, consider what resources your congregation can amass for funding – some, sizable, or signature – and whether or not there is an on-site option.