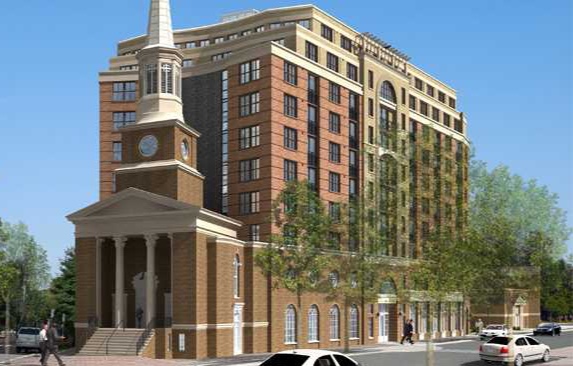 Like many mainline churches, Caldwell Presbyterian Church built an education building to respond to the surging Sunday School popularity of the mid-20th century, when adult attendance at Sunday School sometimes surpassed turnout at worship services. Constructing a 10,000 square foot building on a suburban church property in Charlotte was a reasonable choice at the time for a congregation of 1,100 members.

Church affiliation has changed at Caldwell, as at many other houses of worship.  After dwindling to 12 active members and nearly closing in 2006, Caldwell reinvented itself to attract a diverse and progressive faith community, now numbering 350 souls.  The unconventional composition of the congregation includes not only a mix of race, class, neighborhood, ethnicity, sexual orientation, and gender identity, but also religious background – only about half were raised as Presbyterians. The Christian formation and education at Caldwell takes shape much differently now than at the church of the last century, leaving the education building under-utilized.

During the church’s revitalization, the Sunday School building was repurposed for more than two years as a 50-bed homeless shelter for single women, a satellite location for the Salvation Army.  Those single women were the lost sheep of the housing mix in Charlotte, and when the shelter closed, the congregation keenly felt the loss of serving those most in need.

For the past two years, Caldwell has been working on its new vision for the Sunday School building, investigating both the housing needs of the community and the spiritual needs of the congregation. Those needs intersected with populations most likely to slip through the cracks in the affordable housing crisis, and the church shifted its focus from serving as an emergency shelter to going upstream into permanent housing. [Read about the parable of going upstream here.]

The church has chosen to serve primarily singles earning under $26,000 (under 50% of Area Median Income, or AMI), specifically three marginalized populations in poverty: adults with disabilities, women with newborns, and individuals affected in some way by HIV/AIDS. The current plan is to convert the education building into 15-20 housing units, each 400 square feet, plus shared community space.

“We want to offer a space where God’s beloved community can live together in mutual support and growth,” says Eddy Capote, who leads the church’s Home Committee in charge of the project. “We know it won’t always be easy, but our experience with past efforts like this helped define us as people of faith and Caldwell as God’s house.”

The funding vision for the $3.5 million project combines a congregational capital campaign, public funding at the state, local, and federal levels, and support from private and foundation-related donors. The church has hired The Housing Partnership, Charlotte’s longtime leader in affordable housing development, to manage the renovation and advise on its operations.

The church plans to create a limited liability corporation or other non-profit to own the renovated building. This new entity will lease the housing units to local agencies which will manage client selection and provide social services support. Legal services for the church are already provided pro bono by a local law firm.

While the legal, finance, and construction details are critical, Caldwell finds that ministries like these are about the lives of individuals. Caldwell still counts among its membership some who had lived at the on-site Salvation Army homeless shelter. A number of other active members live in affordable housing or survive on the edge of poverty with fragile housing.

“Faith is about relationships,” says Capote. “While some of our members may not have big bank accounts, they contribute to the kingdom of God on earth and the vitality of our church in even more important ways. Caldwell wouldn’t be Caldwell without them and the relationships we build across all of our differences and similarities.

“The gospel calls us to share what we have – and what this church has is land, a building, and our financial resources to make this happen. Charlotte’s affordable housing crisis is so severe that everyone, every institution will have to do their part, but it’s the people we will welcome to our campus that we look forward to helping and learning from. We’re already praying for them, even though we don’t know their names yet.”

Another congregation facing an uncertain future chose to reinvent itself in a different way than Caldwell.  In 2002, First Baptist Church in Clarendon, Virginia, was struggling to survive with an aging congregation and a post-WWII building with significant repair needs.  Despite multi-million dollar opportunities to sell its land, the church created a housing development corporation, selling to the new entity the air rights above the first two floors.

In 2012, the congregation moved into its new sanctuary underneath a ten-story structure with 116 apartments (see photo above).  More than half of these units serve people needing below-market rate housing across a range of affordability.  A recent CBS special illustrates the deep targeting of some of the units with a story of one resident who was formerly homeless and now pays about $200/month in rent.

The revitalization of the church – also called The Church at Clarendon – was not the result of a massive influx of worshippers from among the new residents.  But the church no longer suffers from the financial burden of a post-war building, and its location one block from a DC Metro stop enhances accessibility for a now-younger congregation.

As The Church of Clarendon re-opened its doors, a nearby Episcopal church was spending a year in discernment about its own future.  The pastor at Episcopal Church of the Resurrection in Alexandria had announced her upcoming retirement, forcing a sober look at options for a congregation drawing only 70-80 worshippers on Sundays.  After evaluating 20 possible scenarios ranging from closing to merging to a part-time pastor, 96% of the congregants voted to tear down the church and rebuild a much smaller sanctuary with affordable housing on the site.

The plan for The Church of the Resurrection has evolved since the first vote – both the sanctuary and the income stream are now smaller than expected – but with each significant change the congregation has reaffirmed its commitment to this choice. In the final vote in October 2018 before the church was deconsecrated, 93% of congregants remained committed to demolition and building affordable housing.

The Church of the Resurrection is now worshipping in temporary space, losing about 20 worshippers — mostly those who are no longer within walking distance or who object to the new, earlier time.  Kat Turner, former senior warden and now member of the Redevelopment Committee, says that the year spent discerning was critical for maintaining unity in the congregation, and that many of those now not attending promise to return when the church reopens in the spring of 2021.

The Church of the Resurrection is flanked by three retirement communities whose staff travel as much as 60-70 miles to their jobs.  Sympathetic to them and other Alexandria workers priced out of the local housing market, the congregation opted to target working class families for its new tenants in the 113 units of affordable housing, all at 30-60% of AMI. The church is planning pre-marketing sessions for the staff at the retirement communities so that they have the necessary information to be first in line for the units.

Congregations embarking on these conversion projects often encounter pushback from the surrounding neighborhood, one of the many risks in building affordable housing. One of the three retirement communities surrounding The Church of the Resurrection publicly protested the parking plan and the lack of brick in their sightlines, circulating a petition among residents and staff.  Turner says that the pastor regularly asks for her estimation of the odds of completion, which she assessed at 15% at the lowest point in the process. The Church at Clarendon had faced four lawsuits by the completion of construction, yet chose to demolish its existing sanctuary before the legal outcome was certain.

Cleghorn, formerly a business journalist and a senior vice president at Bank of America, calls upon his background in business to cope with the complexity of projects like these. As a pastor, he also relies upon his relationships with both church members and community advisers for input on the diverse facets of this initiative. In a recent month-long feasibility study and dialogue with the congregation, Caldwell members showed enormous enthusiasm and readiness to invest in the project.

The constitution of the Presbyterian Church USA calls on congregations to take risk for the sake of the gospel.  Caldwell balances its faith with careful research and preparation, and congregants pray – and believe – that God will see their project through to welcoming the church’s new neighbors and embracing them in the love of God.

The following sets of questions are designed to get your congregation started on the journey to reimagine its buildings:

o   Do you have an education building or fellowship hall on your congregational property that could be repurposed for affordable housing?

o   Is your sanctuary right-sized for your current congregation?

o   Can your congregation afford the maintenance and repair costs for your existing buildings?

o   Is there a particular population that your congregation has already demonstrated a connection to through volunteer work or donations?  Would this housing serve that population?

o   Consider too the mission relevance to your congregation of low-income seniors, those recently released from prison, LGBTQ young adults, moms with multiple evictions, minimum wage workers, refugees, or people with disabilities – all people with barriers to stable housing.

o   Is there an impartial legal resource that can guide your congregation through the conversion process, ideally on a pro bono basis?

o   Does your prospective developer have experience creating affordable housing and arranging for financing?  Can your congregation contribute capital in addition to the building or its current footprint?

o   Is there an agency that could be your partner in this housing initiative – selecting the tenant and supporting the client?

o   Who would serve as building manager – collecting rent, responding to maintenance needs, complying with local ordinances? Consider the options of the agency, the developer, or a professional management company.

o   Who would appropriately manage volunteers from your congregation eager to participate?

o   What constitutes success for this project?  Do you intend the clients to live there indefinitely or move to other homes after stabilizing their situation?

o   How will you engage the neighborhood in your planning process to build community and mitigate protest?

o   Is there an expectation that this initiative would generate income or be financially self-sustaining?

Judy Seldin-Cohen is a volunteer organizer on housing issues at the Stan Greenspon Center for Peace and Social Justice at Queens University of Charlotte, and she serves as the board chair for A Way Home, a $20 million public-private housing endowment.   She is also the co-author of the recently published book Recharging Judaism: How Civic Engagement Is Good for Synagogues, Jews, & America.

Reverend Dr. John Cleghorn is pastor of Caldwell Presbyterian Church in Charlotte, North Carolina, where he has served since 2008.  Caldwell is a diverse, progressive, missional congregation that has enjoyed a strong resurgence in recent years, after nearly closing its doors in 2006. Prior to his ordination, Reverend Dr. Cleghorn worked as a business journalist and a senior vice president at Bank of America.  More recently, he wrote an op-ed piece for the Charlotte Observer about one way to think about our city’s real estate wealth, “What do Charlotte homeowners owe from our ‘nests on high’?”