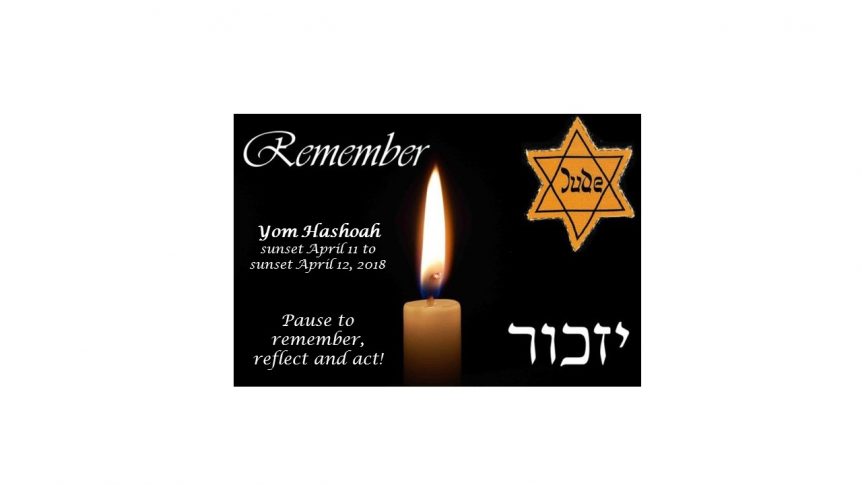 Yom Hashoah, Holocaust Remembrance Day begins at sundown Wednesday, April 11 and continues through sundown Thursday, April 12. It is a day for remembering the Holocaust victims who died during World War II and for committing to put an end to hatred and genocide. On this day, we recall that, during the Holocaust, two major Jewish communities were nearly demolished: the Jewish communities of Poland and western Russia and that of the Baltic States where hundreds of villages and towns were completely depopulated of Jews. We also recall that two thirds of the European Jewish population was murdered.

As we stop to remember the Holocaust, we say the words “never again,” but genocides have occurred since before the time of the Holocaust and continue to occur today. The flames of genocide are fueled when we perpetrate “us” verses “them” mentalities alongside other critical social factors such as economic crisis, change in political leadership, and political unrest.

We say never again to horrific government actions and genocide, and yet “again” is happening at this very moment. Forty innocent lives were lost during a chemical weapons attack in Syria this past weekend. Ethnic cleansing of the Rohingya has claimed the lives of 3,000 and displaced 270,000 people in Myanmar. The Nuer and other ethnic groups are being raped and killed as part of a civil war that has turned genocidal in South Sudan. Thousands of Christians, Shiites, and Yazidis have been raped and systematically exterminated in Iraq and Syria. The conflict between Christians and Muslims in the Central African Republic civil war is heading in a genocidal direction. The victimization of Darfuris in Sudan, recognized as the first genocide of the 21st century, may have disappeared from the headlines but the persecution still exists today.

What can we as individuals do to break the cycle? What can we do as a community?

At the 18th commemoration ceremony of the Rwanda genocide in 2012, then Secretary-General Ban Ki-moon said: “Preventing genocide is a collective obligation. Let us continue to work together to ensure a future forever free of genocide. This would be the most fitting way to remember those lost in Rwanda 18 years ago, and to honor the resilience of the survivors.”

At the Stan Greenspon Center, we work tirelessly to give voice to the voiceless in order to create positive change in the world. We give local educators the tools that they need to equip a new generation to think critically about their role in the world and about the effects and consequences of hatred and intolerance. Utilizing lessons from the past, we use our collective voices to advocate for those in need in the areas of affordable housing, criminal justice, and immigrant justice.  We invite you to join us on this journey.