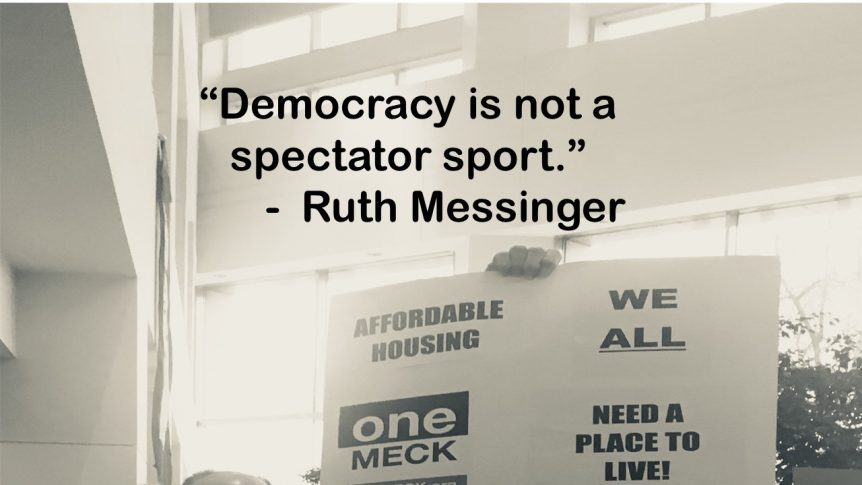 Ruth Messinger once wrote, “Democracy is not a spectator sport.” The Stan Greenspon Center’s affordable housing team is living that message as we work to change how the City of Charlotte responds to our affordable housing crisis. Rabbi Schindler’s recent editorial set the stage, saying, “Now is the time to ask uncomfortable questions and demand clear and courageous answers from our city’s leaders.”

Over the course of the past three months, the Greenspon team has met in person or spoken over the phone with ten of eleven City Council members. We shared comparative data on the size of housing bond issues in other cities. We raised the profile of new tools – subsidizing rents through A Way Home and preserving Naturally Occurring Affordable Housing (NOAH). We urged anticipating housing needs along future transit lines, and we advocated for the poorest households who are facing the largest shortage of affordable rental units.

Many of us operated outside our comfort zones during this process. Scheduling meetings often required identifying and taking advantage of a connection that would lift our request out of the backlog of asks for a specific legislator – all of whom are very busy with the hard work of representing their constituents, and often also working a day job. Practicing the respective parts we each would be presenting required admitting what we didn’t know. And sometimes our meetings were scheduled on short notice, and even so, our team members showed up enthusiastic and prepared.

We amplified our voices by collaborating with other affordable housing advocacy groups — Carolina Jews for Justice and the affordable housing advocacy sub-groups of both OneMECK and the Homelessness Services Network. Two representatives of all four of these groups spoke eloquently at the recent City Council meeting against spending $9.5 million that could be used instead for new tools that would make a greater impact.

Our collective success is not measured by the vote that approved this spending, nor even by the parliamentary motions that separated this vote from other issues on the agenda.

Our success is measured by how we changed the conversation at the City Council meeting. No discussion was planned for this vote, but the debate lasted well over an hour, with every Council member participating. Tariq Bokhari urged Council to take action that would inspire the community to help government solve the problem, especially for those with the greatest need. Justin Harlow indicated that the City was not asking enough from developers to address those with the greatest need. Matt Newton questioned spending $5.3 million for an inadequate impact.

Responding to frustration over the extended debate, Braxton Winston reminded everyone on the dais and in the gallery, “I think we are doing the work, and this is the sausage-making of democracy.”

Democracy requires more from us than voting every four years, or every two years, or even this year – although all of that is essential. Democracy also requires that we engage with our elected government officials to share our knowledge and to advocate for those who lack power and justice. It’s harder than sitting in the stands as a spectator. It can be as messy as making sausage. But changing the conversation about how our City spends tax dollars and bond dollars is a critical first step.