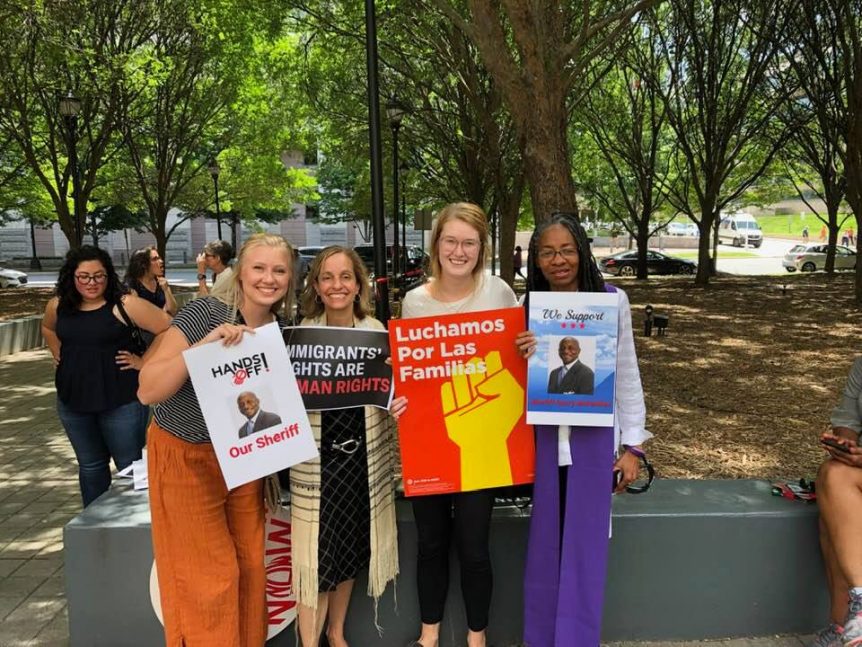 The Stan Greenspon Center under the leadership of Immigrant Justice Team leader, Barbara Randolph, led the way in both authoring of a clergy letter to Governor Cooper requesting that he veto HB370 on the basis of it being unconstitutional and in support of the Interfaith Clergy Rally on June 24th. Over 80 clergy from North Carolina signed the letter and Governor Cooper affirmed publicly his opposition HB370. Faith in Public Life and the Charlotte Clergy Coalition for Justice co-sponsored the June 24th rally. These are Rabbi Judy Schindler’s words at the rally. 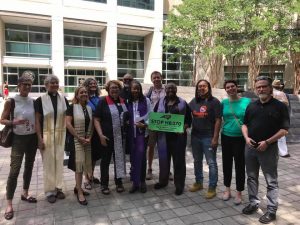 As interfaith leaders, we can no longer just watch NC General Assembly public officials ignore entirely the fundamental reasons for flight — parents and children saving their lives, fleeing circumstances far worse than what our current administration is throwing at them. I often ponder, what would they do in similar circumstances? Can we all just imagine this for a moment?

The Torah, the Five Books of Moses, which is deemed sacred by billions of global citizens and hundreds of millions of Americans is quite clear on the topic of immigrants.

“Love you neighbor,” the book of Leviticus teaches.

Yet so many of our immigrant neighbors are living in fear – fear that their hardworking family members could be detained and deported.

“Love the foreigner who dwells among us,” Deuteronomy teaches us. “For we were once that foreigner.”

My father was that foreigner. Fleeing Nazi persecution, he arrived on our country’s shores on August 1, 1938. This prayer shawl is his. His first sight upon arrival was the Statue of Liberty with its words of promise penned by Emma Lazarus, “Give me your tired, your weary, your huddled masses yearning to breathe free.”

But today our borders are oppressive for those fleeing persecution. And those who have made homes here are being cast out.

Many of the students whom I teach are fearful – fearful that their friends and their families who are honest and industrious individuals will be torn from their loved ones. These are individuals who have contributed to the Charlotte and North Carolina community – many for more than a decade. Immigrants contribute greatly to our community and to our society. North Carolina’s agricultural and construction industries depend on immigrants.

This past February when 275 North Carolinian immigrants were arrested, many of my students were tearful. “How can we live in such a city and state?”

“Justice, justice you shall pursue,” the book of Deuteronomy teaches.

But House Bill 370, if passed, will unlawfully and unjustly detain our immigrant neighbors. HB 370 would force all sheriffs in the state to cooperate with Immigration and Customs Enforcement (ICE) and detain immigrants beyond the legally allowable period under the law. HB370 allows for arrest before evidence is presented before a judge of the alleged crime.

“You shall have one standard of law for the foreigner and native-born,” Leviticus adds.

But we do not. Our recently elected Sheriff, Garry McFadden, understood a basic tenet – everone’s public safety rests upon trust between the communities and law enforcement officers. He understood the importance of equal protection under the law and the right to due process, as mandated by the U.S. Constitution. This is what underpins that trust. We elected him on these basic tenets. HB370 does not do justice. It allows for the REMOVAL of democratically elected sheriffs from office if they do not comply with the bill. We voted in Charlotte-Mecklenburg for a sheriff who would terminate the 287g program. The State seeks to override our will casting rebuke not just on us but on all the voters of NC’s largest cities, like ours, who asked their sheriffs to stop collaborating with ICE. HB370 eliminates bare minimum protections for crime victims and witnesses. This is of particular concern for survivors of trafficking and domestic violence in our state. This creates mistrust of law enforcement harming community cohesion, civic engagement, and the overall well-being of immigrants and citizens alike. Teach your children, Deuteronomy instructs us.

What are we teaching our children? That it ok to tear parents from children and children from parents at borders. That it is ok to leave children on cold floors with insufficient blankets to keep them warm or healthcare to keep them whole.

What are we teaching our children? That is it ok to have random arrests with unlawful warrants that send mothers and fathers away.

North Carolina State Senators, tonight please vote no to HB370. If that compassion for our neighbors and commitment to our citizens who voted for this cannot be found, then Governor Cooper, please veto HB370… so that love, justice, and treating the foreigner and native with laws that apply equitably can be the value that we teach our children and live ourselves.