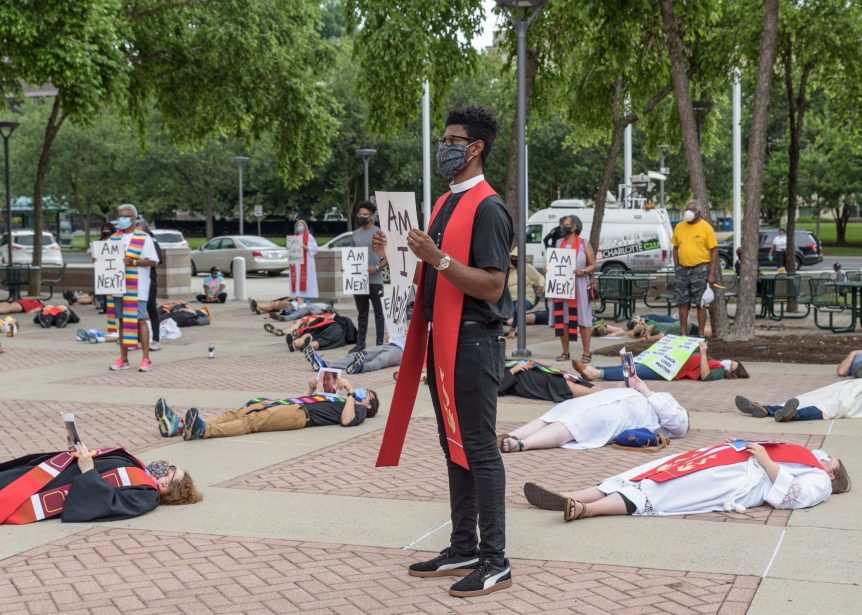 In the week following George Floyd’s death, Charlotteans were angry. They protested, contacted city officials to demand reform of CMPD, and mourned the loss of Black men and women who have died at the hands of police. Religious leaders are among those calling for the citizens and government of Charlotte to work towards the dismantling of white supremacy and institutional racism on a local and national level.

On Monday morning, clergy from various religious communities gathered in front of the Charlotte-Mecklenburg Government Center to demand change. These leaders from all faiths stood in the heart of the city and called for the reform of policing in Charlotte and justice for Black Americans killed by police.

The clergy held a “die-in”, a form of protest in which participants simulate being dead. For 8 minutes and 46 seconds, white clergy lay on their backs while their Black counterparts stood with signs that read, “Am I Next?”. The duration of the demonstration was the same amount of time that George Floyd was pinned to the ground by a Minneapolis police officer, eventually resulting in Floyd’s death. As they lay on the ground, Rev. Glencie Rhedrick, one of the organizers of the event, recounted the events that transpired in the minutes leading up to Floyd’s death.

Clergy held signs with messages demanding racial justice and photos of Black individuals who have died at the hands of police. They stated the names of these individuals, remembering their lives, and grieving their deaths. They repeated the statement, “I can’t breathe”, some of George Floyd’s final words.

At the event, the clergy also presented a list of demands to CMPD. These demands included the termination of police use of tear gas, pepper spray, and other chemical agents against peaceful protestors. They also demanded the end of kettling, a police tactic used to confine demonstrators into a small area. They demanded fines be sent to any person who makes an emergency call to the police against black people and insisted that clergy be involved in hiring the next police chief.

The clergy’s demands are a part of national effort to reform and defund police departments across the nation. Activists and protestors are calling for the reallocation of police funds to social justice initiatives or other areas of city development that will reduce inequality. The clergy made it clear that they will not rest until strides have been taken to change an institution that been a source of trauma and anguish among Black communities since its inception.

The “die-in” demonstrated that people are fighting for change through action and tireless demands. The clergy’s protest reflected the dying, loss, and horror repeatedly experienced by the Black community, and it affirmed the clergy’s commitment to reducing this suffering and fostering social justice in Charlotte.