As Jews began the holiday of Passover during the last weekend in March, at their traditional Seder meal they recited the 10 Plagues that God is said to have imposed on the ancient Egyptians as punishment for not freeing their Israelite slaves. But this is the second consecutive Passover marked by the modern-day plague of Covid-19, which has killed more than 2 million people worldwide and dramatically restricted all forms of social interaction.

The work of Mike Wirth, a Queens University professor and artist, is being included as part of a national initiative by the CANVAS Jewish Arts & Culture Funding Collaborative called “Dwelling in a Time of Plagues” Passover project. The coast-to-coast exhibition mobilizes Jewish artists, authors, artistic and cultural networks, and museums as a creative response to the real-world plagues of our time.

Wirth’s piece, entitled “Havtachah – the Promise,” honors those living in tent cities in Charlotte who face dire economic hardship and housing insecurity. He says he drew inspiration from Vincent Van Gogh‘s “Starry Night.” The blue tents are dispersed against the dark sky with yellow stars. The yellow tent in the center is designed to draw viewers inside to experience what it must be like to live in a tent in the middle of the city.

“That was the thing that struck me was, man, it’s cold out there,” Wirth said. “Many of us have never experienced homelessness to know what it’s like and I think that’s scary. And I know the average person who I’m trying to speak to, if they felt one minute of that, would act.”

“I believe that all would say what Mike Wirth says so brilliantly in this work – that we’re not talking about a city of tents – we’re talking about a city of people,” said Reverend LeDayne McLeese Polaski, executive director of the Mecklenburg Metropolitan Interfaith Network. “We allow homelessness to continue when we cannot acknowledge that those without a place to live are fully human. We respond with the mindsets, the logistics, the policies and the plans to end it, when we see them – and count them as sisters and brothers. I want more of that.”

A Charlotte interfaith project, the traveling 16′ x 8′ mural was unveiled at Camp North End where it will remain during the Jewish holiday of Passover (through April 4). It will then move to four other sites around Charlotte for Easter and Ramadan as part of a “pitching our tent tour” that will inspire increased conversation around Charlotte housing.

“This is a social justice effort. Our Charlotte artwork focuses on housing insecurity,” said Rabbi Judy Schindler, Sklut Professor of Jewish studies and director of the Stan Greenspon Center for Peace and Social Justice at Queens University of Charlotte. “We have hundreds of individuals who were recently moved from tents to hotels for 90 days, but what will happen afterward? We do not have enough affordable housing for the working poor in our community. This inclusive partnership is designed to spark conversations as the mural tours interfaith sites from Passover through Easter through Ramadan.” 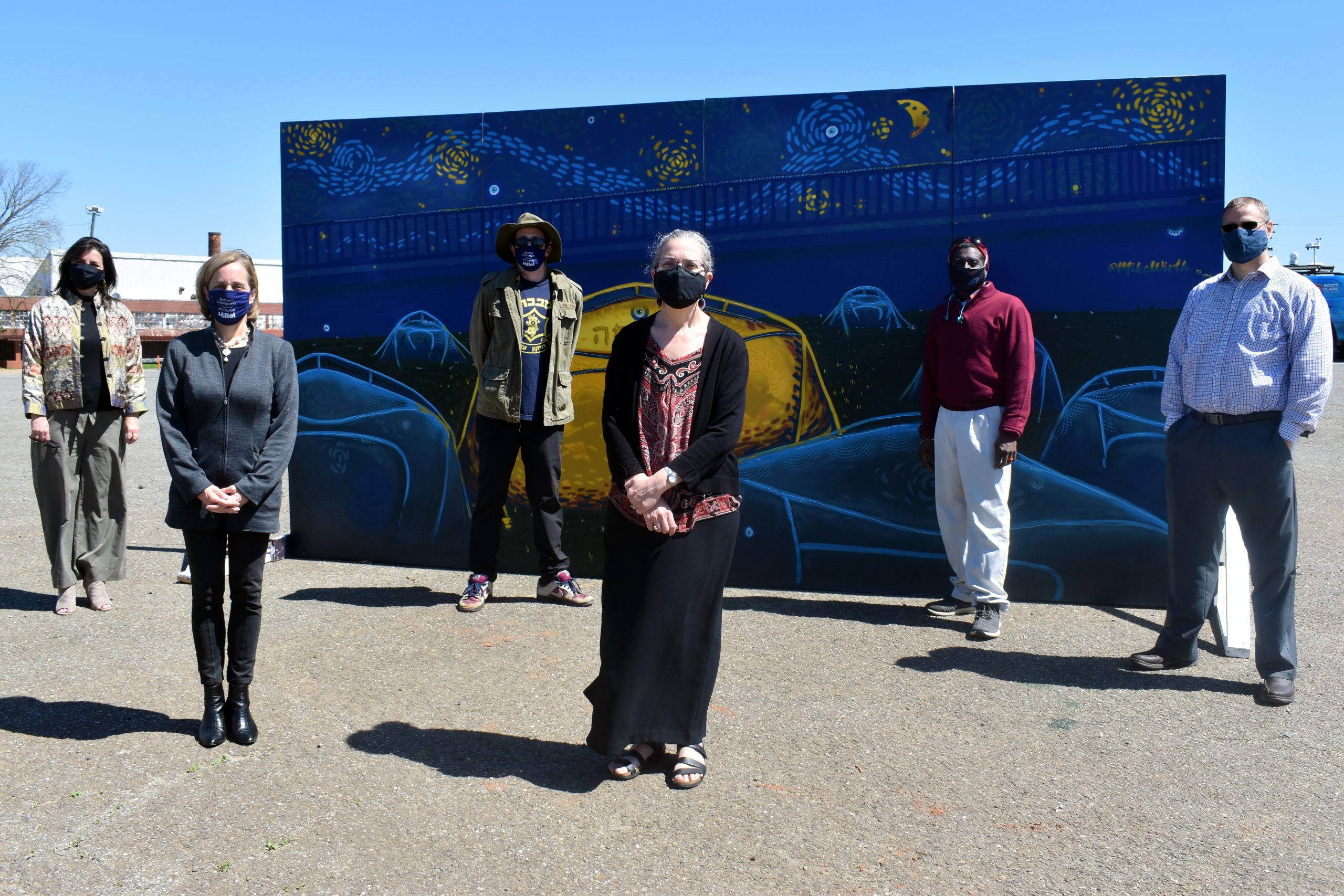