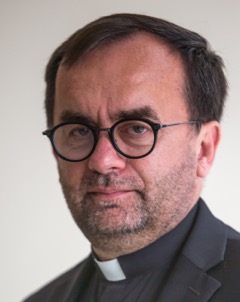 Join us on September 14, 2017 from 7:30pm-9:00pm in the newly renovated Belk Chapel at Queens University to celebrate our one year anniversary.

The Stan Greenspon Center for Peace and Social Justice is thrilled to be hosting internationally renowned human rights activist, Father Patrick Desbois, the Braman Endowed Professor of The Practice of the Forensic Study of the Holocaust at the Center for Jewish Civilization at Georgetown University. Father Patrick Desbois, President of Yahad-In Unum, has devoted his life to confronting antisemitism and furthering Catholic Jewish understanding. Since 2001, Father Desbois has led an undertaking of identifying and locating undiscovered mass graves of Jews killed during the Holocaust in Eastern Europe.

Father Desbois is the director of the Episcopal Committee for Relations with Judaism and serves as a consultant to the Vatican on relations with Judaism. His book, The Holocaust by Bullets, documents his findings and is the winner of the 2008 National Jewish Book Award. Fluent in Hebrew and English, Father Desbois was awarded the Medal of Valor by the Simon Wiesenthal Center, the Humanitarian Award by the U.S. Holocaust Museum and has received honorary doctorates from many universities. In addition, Father Desbois has received Frances’ Highest honor The Legion d’honneur and his work has been featured on CBS’s 60 minutes.

We hope you will join us to celebrate the amazing successes we have had as a center and learn about our future plans. We have touched and taught hundreds of teachers and thousands of students.

There is no admission fee but seating is limited.