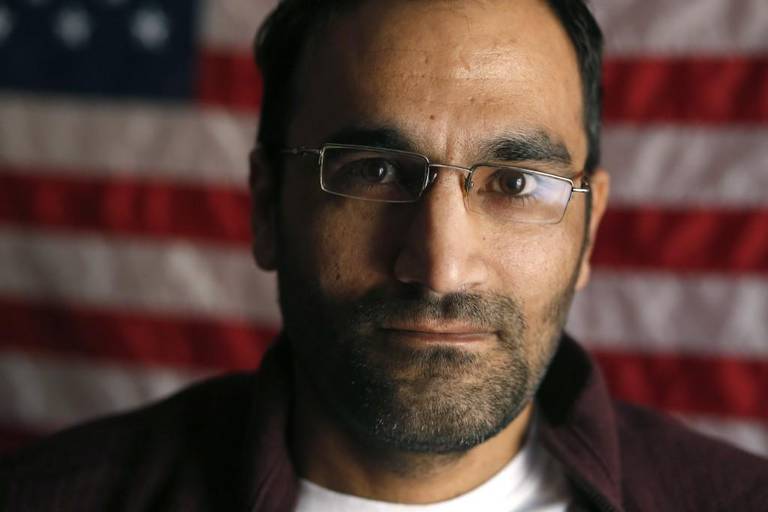 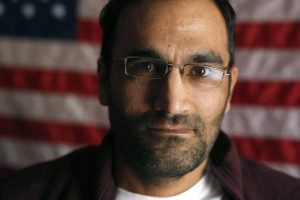 UNC Charlotte recently established the Anabel Aliaga-Buchenau Witness in Residence Initiative. It supports an annual program that bring to the Charlotte community individuals who have lived through substantial human-rights crises and who are working for solutions.  The inaugural program was held in mid-April, and because of our strong relationship with UNC Charlotte’s Center for Holocaust, Genocide & Human Rights Center, Queen’s University and the Stan Greenspon Center for Peace and Social Justice was invited to host an event on Wednesday the 19th.

The program was opened by renowned Middle East expert Dr. Charles Kurzman, sociology  professor and co-director of the Carolina Center for the Study of Middle East and Muslim Civilizations at UNC Chapel Hill.  Syrian refugee Zubair Rushk then shared his story of growing up under Syria’s Assad dictatorship as a member of the persecuted Kurdish minority.
Dr. Kurzman explained that Syria emerged from the remnants of the Ottoman Empire, which collapsed at the end of World War I.  The victorious European powers, France and England, helped themselves to many of the former Ottoman territories.  “When you see these straight lines on a map,” Dr. Kurzman explained, pointing to Syria’s southern borders, “you can guess that the map was drawn up by outsiders with little concern for traditional ethnicities and communities.”  The Kurdish people, who have possessed a strong national and cultural identity for many centuries, now found themselves dispersed within four different countries:  Turkey, Syria, Iraq, and Iran.  In each they have endured varying levels of persecution which in Iraq culminated in genocidal violence (1987-1989) and that include forms of mass violence and cultural genocide in each of these countries.  It was Syria’s attempts at cultural genocide that Zubair Rushk was trying to combat when he opened an underground school to educate students in their Kurdish history, language, and culture. 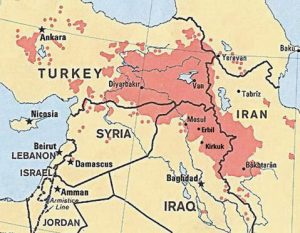 Dr. Kurzman also gave a brief summary of the civil war that erupted in March 2011.  This was in the early months of the Arab Spring, which had already shaken and toppled longstanding dictatorships in Tunisia, Egypt and elsewhere.  Graffiti appeared in the streets of Damascus, taunting President Bashar-al-Assad with the phrase “Doctor, your time has come.”  (Assad lived abroad practicing Ophthalmology in London in the 1990s, later returning to take power when his father Hafez Assad died in 2000.)  When protests and rebellions began in Syria in early 2011, Assad responded more brutally than any other tyrant in the region, unleashing indiscriminate and massive firepower, including chemical weapons, against the populace.    Dr. Kurzman conveyed the complexity of the Syrian conflict, which actually involves multiple competing conflicts.  These include two self-proclaimed “Islamic” revolutions, which produced ISIS, a democratic revolution, and a Kurdish rebellion.

Zubair Rushk gave a riveting account of his life growing up as an outsider, and eventually a rebel, in a modern but oppressive society.  In the early 1960s the Syrian government wanted to establish a homogeneous Arab society in Syria.  This entailed the suppression of non-Arab cultures and languages.  Rushk was born to a Kurdish family in 1982 during a period of great upheaval throughout the region.  He reminded us of the consequences such upheaval has on everyday life; we see images of violence and chaos, but cannot see the less spectacular but equally deadly consequences,  such as lack of access to vaccines.  Because of this lack of vaccines, Rushk contracted polio as a young child.  Again today many Syrians are denied access to basic food and medical needs due to the bitter civil war.

Growing up Kurdish meant that Zubair always felt like an outsider.  He became acutely aware of this in his youth. while attending schools where classes were only taught in Arabic and his own language was banned.  As he became more aware and proud of his Kurdish heritage, he began to rebel.  As a young teen Zubair would sometimes yell out a Kurdish word from the back of the classroom, he recounted with a smile.  But one day this mischief got him into trouble.  The school called the police to take away this troublemaker.  The consequence of his rebellion was one week in jail.  This harsh experience did not deter young Zubair from his passion to embrace and learn his own culture.

A few years later Zubair graduated from the University of Aleppo as an electronic engineer.  He moved to the city to find work, but due to his ethnicity and refusal to join Assad’s Ba’ath Party, he couldn’t find employment.  To join the party would have meant betraying his people and promising to spy on friends and family for the dictatorship. Rushk explained “I’d rather starve than to do that.”

Luckily, Zubair’s engineering background enabled him to open a computer store to sustain his family.  He also decided to open his own underground school, which was illegal, in order to teach young students culture, history,  and language.  With the help of two volunteers, he taught about 40 young students between the ages of 7 – 14 years old.  He had to teach them how to be secret about their attendance, but this didn’t discourage this determined group from pursuing an education.  This was his true calling and he was so excited to be making a difference in his community.

Rushk’s passion for teaching eventually got him in trouble with the Assad regime.  Several months after he opened his doors, two Kurdish men knocked on his doors and inquired about the school.  Unfortunately for Rushk, these men were spies and he was quickly arrested and taken to the local prison.  For 72 hours he sat in a cell with no food, no water, no bathroom.  After this he was transferred to another prison where he had to do forced labor.  The cell that he lived in was designed for 15 people, yet filled with 83 prisoners.  The men rotated 2-hour sleep schedules where they could actually lie down while the other men crowded around. 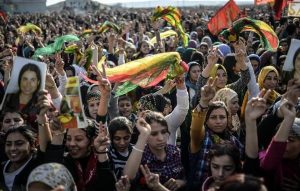 Kurds in Syria and Iraq have had to contend not only with those country’s efforts to destroy them, but with ISIS, which targets Kurds and other ethnic and religious minorities. Most Kurds are Sunni Muslims, but like other Muslim groups are viewed as “apostates” and enemies by ISIS. In this January 2015 photograph, Kurdish people celebrate in a Syrian town near the Turkish border after Kurdish fighters expelled Islamic State group militants from the Syrian border town of Kobane. (AFP Photo/Bulent Kilic)

It was evident that Rushk could not be broken nor would he apologize — “I was proud of what I had done” — so they decided to release him.  However, not without one final and severe torment.  Before he got his freedom, Rushk was placed in a small room with no light, with his hands bound and head locked against the chair.  Initially he thought “this is not so bad; I even laughed” because it seemed mild after all he’d been through.  However, that’s when the drops of water on his head began.  At first this was nothing more than a distraction, but as the ryhthmic drops continued they began to provoke dread and felt “like hammer blows” pounding upon his brain.  The horrifying result of this final torture was that he became practically paralyzed and incurred severe memory issues and PTSD that lasted for three years.  Luckily, he later received help through a program at UNC Chapel Hill called Restart, but this is an ongoing process of recovery.

It was in this debilitated state that Zubair was dropped off at his family home.  Seeing his condition, and faced with the prospect that he would be re-arrested and face a lengthy prison sentence, Zubair’s family planned his escape to Lebanon.  The route was long and perilous for someone in such bad physical and mental health, yet Zubair crossed the mountainous border — after being swindled by smugglers, “which is what smugglers always do,” Zubair commented ruefully — and was received by his brother.  Horrified at his condition, Zubair’s brother constantly worried that he might attempt suicide.  Zubair remained in Lebanon for five years, always fearing he would be discovered by Syrian-allied militias and police and sent back to Assad’s prisons.

Eventually, Zubair gained refugee status through the UN and after five years of interviews and background checks arrived on May 1, 2010 in Durham, NC.  “I was so happy when I saw my tiny studio apartment.  I knew I would work hard and become a proud and contributing citizen of the United States.”  Life was hard for Zubair, as single refugees only receive one month of assistance before they must start being responsible for all of their bills.  He struggled to find work, but eventually got a job as a dishwasher at The Cheesecake Factory.

In 2012, Zubair decided to go to Ohio for a surgery to correct his complications from Polio.  After the surgery to correct his right leg, which was significantly shorter than his left, Zubair finally was able walk without issue.  His community of friends encouraged him to go back to school and, due to their support, he found great success at Durham Tech.  Zubair graduated with honors and in 2015 became a U.S. citizen.  He is now a junior at UNC Chapel Hill, majoring in Global Studies as well as UNC’s acclaimed Peace, War, and Defense program.

Zubair emphatically stated that, for the first time in his life, “I felt like I belonged” to a community.  After five years of living in Durham, he got his citizenship.  He felt accepted and was encouraged to be an engaged member of society. Zubair emphasized the assistance he’d received from numerous good-hearted people in the Triangle area. 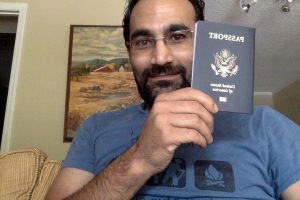 But then Mr. Rushk concluded his talk on a somber, troubling note. Unfortunately, he explained, all this goodwill and hopefulness changed drastically during this previous campaign season and the election of President Donald Trump.  The elections and the upsurge in xenophobia made him question himself and his place in our country.  For the first time since 2010, he has been made to feel like he is not accepted and not respected as a citizen. “It brought back terrible feelings of being an ‘outsider’” throughout his youth in Syria.  Zubair decided to take action to help others, as he himself had been helped, and started a new group, North Carolina United for Refugees and Immigrants. Its members help welcome local immigrants and create community for newly arrived refugees, doing everything from teaching English to providing childcare.  They make refugees and immigrants feel welcome.