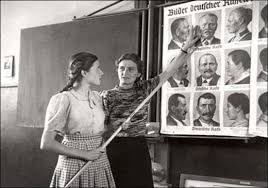 After a long day at school, I often find myself asking the question, “What am I doing here?” This is a pretty common thing among teachers. We are in the classroom because we care about our students, we want to impact them in positive ways, and we want them to grow into thoughtful and productive human beings. Every teacher I know would agree that our roles are varied and complex. On good days we are uplifted and encouraged to continue. We walk out of school with our heads high knowing that somehow, we made a difference for good.

Did you ever stop and think, “What role did teachers play during the Holocaust?” As I think about this question, I can’t help but believe that teachers in Germany felt the way we do today. They cared about their students and wanted to impact them in positive ways. They hoped their students would grow into thoughtful and productive human beings. Teachers probably felt pretty good about what they were doing after a good day in the classroom. Then, one day, everything changed. Hitler was appointed Chancellor of Germany, the Reichstag fire gave him the reason to assume complete control, and Germany became the Third Reich.

Under the authority of the Third Reich, teachers were obligated to join the National Socialist Teacher’s League, which was responsible for carrying out the educational goals of the Nazi Party, and to take an oath of loyalty to the Führer, Adolf Hitler. Despite these obligations, though,

teachers were still able to make individual choices. Some chose to comply with Nazi ideology, while others chose to act in opposition.

The United States Holocaust Memorial Museum has developed materials to help today’s educators explore the pressures teachers felt under the Nazi regime, the range of decisions individuals made in the face of those pressures, and the relevance of this history now. We will spend the day exploring and discussing these resources.

This day of education is offered by the NC Council on the Holocaust. Visit their website for additional professional development opportunities and resources for teaching this challenging subject: