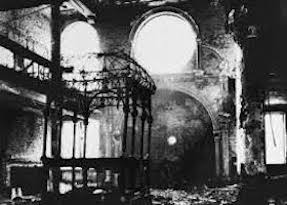 Eighty years ago, on the night of November 9th, 1938, the Nazi government stood by and watched as synagogues, Jewish owned businesses, schools, and homes were vandalized, looted, and destroyed. Fueled by deeply ingrained antisemitism, distrust, and hatred, the violence continued for the next 48 hours. The fire department was instructed by the Gestapo to stand by in order to protect nearby German owned homes and businesses. They were told to let the Jewish buildings burn.

The Nazi government felt the violence was justified by the assassination of Ernst vom Rath a few days earlier by a 17-year-old Jewish youth named Herschel Grynszpan. Herschel’s family had been deported from Germany and dumped at the Polish border with no money, possessions, or place to go as the result of a Nazi deportation action. History shows that the act of that 17-year-old was just the excuse the Nazis used to move their pro-Aryan agenda to the next level.

Commemmorating the 80th Anniversary of this event at this point in our own country’s history is particularly painful. Eleven Jewish people were killed on October 27, in Pittsburgh, PA while worshipping in their own synagogue by a man filled with antisemitic hate. In the year 2017, the most recent year for reliable data, reported incidents of antisemitism rose 57% over the year 2016. That does not include unreported acts.

It is indeed a difficult and troubling time for Jewish people in the U.S. It is also a time for educators to become outspoken upstanders.

It is more important now than ever before for educators to take the time to speak with our youth about antisemitism and biases of all kinds. The 80th Anniversary of Kristallnacht gives us an opening to do so and still stay within our curricular boundaries. November 9-10 are two days that bear historical significance in World and U.S. History. The themes found in the events of Kristallnacht are universal and useful in any English Language and Literature class. There are historical documents and maps to be explored.  There are diary entries, memoir excerpts, and poems to be annotated and analyzed. There are short and long films. There is video testimony from survivors. All we need to do as educators is to resolve to do something and then do it. To do nothing is to let silence have the day.

Here is a short list of resources for you to use in your classroom.

Facing History and Ourselves lesson plans

If you do not know where to start, please contact us at the Greenspon Center and we will work with you to find a lesson that fits your needs.

Please join us at the Kristallnacht 80th Anniversary Commemoration at Temple Israel on November 7 at 7pm. The event is free and open to the public. 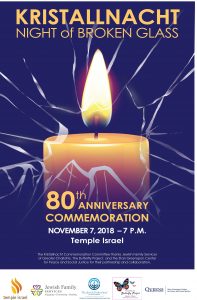