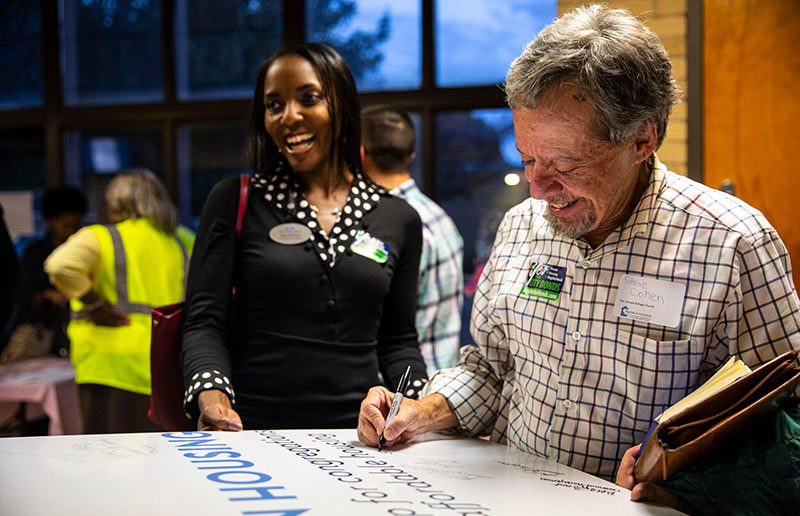 How did we become advocates?

We educated ourselves on the issues. We practiced how to meet with City Council members.  We developed a coalition with other advocacy groups. One volunteer commented during training, “You know, this is totally outside my comfort zone.”  (She became a rock star presenter during the year.)

Our work at City Council was praised by those we were lobbying.  Council Member Larken Egleston commented in his R&D in the QC podcast, “It was the kind of demonstration of support and accountability that we want to see.”

For what did we advocate?

For the first four months, we addressed the 2018-19 City Budget. Over the summer, we advocated for new uses of housing bond dollars.  In the fall, we promoted the housing bond referendum and conducted the Faith in Housing workshop.

We were also part of the chorus advocating to increase the housing bond referendum from $15 to $50 million, which also passed City Council.  We distributed Vote Yes For Bonds yard signs, volunteered at the polls, and worked social media, contributing to voter approval.

What did we accomplish with bond spending plans this past summer?

We added the requirement to the City’s Housing Charlotte Framework that 20% of units funded with bond dollars would be dedicated for the poorest households, those who are also facing the greatest shortage of housing.  In addition to the new 20% requirement, another 10% of units will now be offered on a priority waitlist for those in this group with a rental subsidy or housing voucher, when possible. Importantly, when City staff was quoted in the Charlotte Observer that the 20% was not mandatory, we and our coalition spoke up, ultimately causing the mayor to publicly reiterate the 20% commitment.

What did we accomplish with the Faith in Housing workshop in November?

The Faith in Housing workshop showcased six congregations who are creating affordable housing. More than 130 clergy and congregants attended their choice of two breakout sessions among on-site and off-site examples across a broad range of funding.   Already one church is starting the process to use their resources for affordable housing. Check out the workshop highlights here.