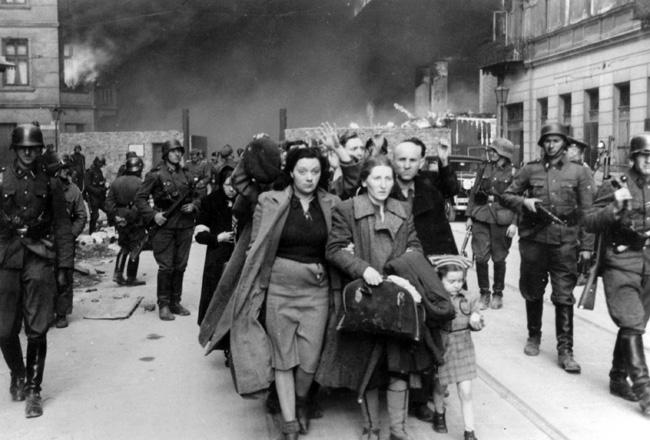 Yom Hashoah, Holocaust Remembrance Day is also known as Yom HaShoah v’Hagevurah, which means Day of Remembrance of the Holocaust and Heroism. In 1953, the Israeli Knesset/Parliament established the date, the 27th day in the month of Nisan, as a day of commemoration because it marked the anniversary of the Warsaw Ghetto Uprising.

The leaders of Israel chose to commemorate the 6 million Jewish victims of the Holocaust not on the date in which the most Jewish deaths occurred (such as at Babi Yar) but on the day that marked an enormous act of Jewish resistance, courage and heroism.

The Warsaw Ghetto was the largest of Jewish ghettoes in Nazi-occupied Europe. In 1940, the 350,000 Jews of Warsaw were forced to move into a ghetto that was slightly more than a one square mile. Another 100,000 would be later by transferred there. Eighty thousand would die of starvation. In 1942, the Nazis began the ultimate deportation of 300,000 of those Jews – most of whom would meet their end in German death camps.

The less known chapter is that several Jewish underground organizations, numbering approximately 750 people, with limited weapons — pistols and explosives — fought back. At the outset of 1943 German troops began rounding up Jews. The Jewish resisters (ZOB) knew it was time to act. On April 19, 1943 the first night of Passover, the Germans attacked with the intent to liquidate the Warsaw Ghetto. Many believe that the attack was planned for the eve of Passover to transform the Jewish historic day of celebrating liberation into a day of destruction. The ZOB fighters, led by Mordechai Anielewicz, ambushed the Germans, killing and wounding German soldiers. Over the next few weeks, they fought heroically. Amid the blazing inferno, the Jewish Armed Resistance Organization printed a pamphlet, below is an excerpt:

. . . Every doorstep in the Ghetto has become a stronghold and shall remain a fortress until the end. All of us will probably perish in the fight, but we shall never surrender! We, as well as you, are burning with the desire for vengeance. It is a fight for our freedom, as well as yours; for our human dignity and national honour, as well as yours!

We shall avenge the gory deeds of Oswiecim, Treblinka, Belzec and Majdanek. Long live freedom. We must continue our mutual struggle against the occupant until the very end.” (http://www.holocaustresearchproject.org/revolt/warsawbattle.html)

They fought heroically until the final battle at 18 Mila Street, the site of Ghetto fighters’ headquarters.

The Germans planned to destroy the Ghetto in three days, but the ghetto fighters held out for a month, much longer than all of Poland did after the Nazi invasion. Even after the Ghetto was obliterated and its buildings burnt down, Jews hid in the ruins ambushing German soldiers. Some Jews escaped through the sewers, most were killed or deported to death camps.

The Warsaw Ghetto revolt was among the first Jewish uprisings against German occupied Europe. This one action inspired many others. Anielewicz, then declared, “We can, we will, we must do something,” leaving a profound legacy for future generations.

This day has always had special meaning for me.  All four of my grandparents are Holocaust survivors. They believed that the best response to overwhelming tragedy was to create families and lead meaningful lives. Unfortunately, even after the Holocaust antisemitism remained strong in Poland. Between 1956 and 1960, 50,000 Jews left Poland for Israel, among them my grandparents and parents. They came to Israel, learned new languages, and rebuilt their lives.

Jonathan Sacks, former Chief Rabbi of the United Hebrew Congregations of the British Commonwealth once said, “We cannot bring the dead back to life, but we can bring their memory back to life and ensure they are not forgotten. We can undertake in our lives to do what they were so cruelly prevented from doing in theirs.”

I base my life on this idea –to help the world remember by helping others tell their stories.  Working at the Stan Greenspon Center for Peace and Social Justice allows me to educate area students and work with survivors and their descendants to share their stories in meaningful ways. My goal is to connect this history to our present and future, with the intention of creating a better future, one that is devoid of horrific acts against the most vulnerable.

At this time of increased antisemitism and attacks on Jews, and decreased knowledge of the Holocaust among young people (according to the Conference on Jewish Material Claims Against Germany survey, twenty-two percent of millennials said they haven’t heard of the Holocaust or are not sure whether they’ve heard of it and two-thirds of American millennials could not identify what Auschwitz is), we have an obligation to remember, honor and educate.

Seventy six years after the beginning of the end of the Warsaw Ghetto, on the last day of Passover, we were confronted as a people with the second murderous attack on a synagogue in America in six months. We have an obligation, in honor and in memory of the victims of the Shoah, as well as the victims of the shootings in Pittsburgh and Poway, to say, “Enough! Enough bloodshed, enough gun violence, enough hatred.”

Rabbi Yisroel Goldstein closes his April 29th New York Times editorial with a commitment to gevurah – to strength, survival and resistance. “America is unique in world history. Never before was a country founded on the ideals that all people are created in God’s image and that all people deserve freedom and liberty. We fought a war to make that promise real.  And I believe we can make it real again. That is what I pledge to do with my borrowed time.”

The heroes whom we celebrate on Yom Hashoah taught us that when faced with challenges, we can do things we never ever thought we could do. The ordinary person can do extraordinary things. The capacity of people when confronted with seemingly insurmountable obstacles – the almost impossible – is testimony to the inner spark we all possess.