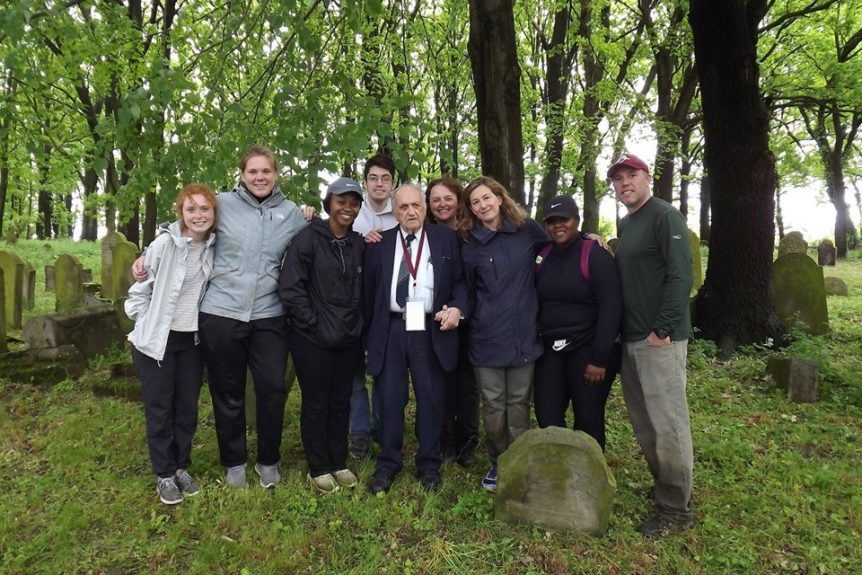 On May 13, 2019 a group of University of North Carolina at Charlotte and Queens University of Charlotte students embarked for Poland. This trip is the culmination of a semester course in which students explored Jewish and Polish history and addressed questions about preservation, memory and commemoration. In preparation for the hands-on work awaiting them in Poland, this group also conducted a small project at Charlotte’s Hebrew Cemetery. 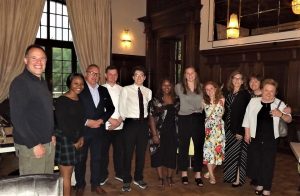 The students spent their first week in Poland touring various museums and historic sites in Warsaw and Krakow. They discovered how the experience of Jews in Poland fits into the broader Polish history. Led by phenomenal tour guides, they toured the Warsaw and Krakow Ghettos, the Polin Museum, the Museum of Warsaw, Zabinski’s Villa at the Warsaw Zoo, the Nozyk Synagogue, the Galicia Jewish Museum, the Okopowa and Brodno Jewish Cemeteries in Warsaw and both the Old and New Jewish Cemeteries in Krakow.  The highlight of the tours occurred when the group visited the exhibit on the Oneg Shabbas Archive at the Jewish Historical Institute in Warsaw. The students read Samuel Kassow’s book on Emanuel Ringleblum and the Archive during the spring semester course. To see the artifacts in their historical setting was moving.

In every city the JCC hosted the group for dinner. Students engaged in discussion with local representatives about the Jewish renewal in Poland and the challenges of preserving Jewish memory.

The group spent a powerful day at Auschwitz-Birkenau, followed by a dialogue at the Centre for Dialogue and Prayer in Oswiecim. All of these visits supplemented the course readings and discussions from the Spring semester.

During the second week, the students got to work at the Jewish cemetery in Brzesko, about an hour outside Krakow. Prior to our visit, representatives from the Foundation for the Documentation of Jewish Cemeteries in Poland began to document inscriptions on some of the matzevot (headstones) in the cemetery. They have documented about half of the matzevot. To help complete this work, the students cleared the area around the remaining tombstones to make them accessible.

Historical records presume that Jews began settling in Brzesko in the 16th century. By the turn of the 20th century, they constituted sixty percent of the town. They worked in commerce, inn-keeping and the local distillery business as well as held positions such as judges, lawyers, doctors and clerks. This population ranged the spectrum of economic classes and had several houses of prayer and a synagogue.

Already in September 1939, the Jews of Brzesko felt the sting of discrimination. On September 22, an issued regulation required all Jewish shops to be marked. This regulation forced able-bodied Jews to perform various cleaning jobs throughout the town. In the spring of 1941, a newly established ghetto in Brzesko forced 6,000 residents coming from Brzesko and surrounding villages to live in cramped conditions. The ghetto dissolved on September 17 – 18, 1942. During this time, all the Jewish residents gathered at the market square and were transported to the Bełżec and Auschwitz extermination camps. Those deemed sick and unfit for travel were shot on the spot, their bodies buried at a mass grave located in the Jewish cemetery. The Jewish cemetery lay neglected and abandoned for decades. This is why the students are here.

A few years ago, Anna Brzyska, a resident of Krakow, visited her in-laws in Brzesko and became appalled at the condition of the Jewish cemetery. She took it upon herself to begin transforming the cemetery into a place that honors the deceased, identifies and commemorates the mass graves, and allows the descendants of the survivors to research their family histories.

On May 20, the students arrived in Brzesko and immediately went to work at the cemetery.  Here, they helped prepare it for the Foundation’s upcoming documentation work. Much of this involved cleaning around the graves and removing substantial brush to make matzevot accessible for indexing and geolocation. Our group partnered with the local high school. They attended a workshop addressing questions about cultural differences and connections and spent time cleaning the cemetery together and just bonding with one another.

Additionally, our students learned about the history of Brzesko and its Jewish community, including visiting the regional museum’s exhibition on Brzesko Jews. Anna documented nearly 2500 Brzesko Jews murdered in the Holocaust. The museum displays their names (and additional information, when available) in a small memorial listing and in a digital interface.

A highlight of our time in Brzesko was meeting a 91-year-old Holocaust survivor, Dov Landau. Born in Brzesko in 1928 to an Orthodox Jewish family, Dov is the oldest of four brothers. In 1941, synagogues in Brzesko were set ablaze and all males aged 13 and above were forced to labor for the German war effort. About a thousand people – including his mother and a brother – were rounded up and transported to an unknown destination, never to be heard from again.

Dov spent the next three years in many concentration and labor camps: Szebnie labor camp, Auschwitz-Birkenau, Gross-Rosen and Buchenwald.

On April 1945, at age 17, the American troops arrived and liberated him from Buchenwald. Following the war, Dov went to what would become the State of Israel and later fought in the Israeli War of Independence. During his army service, he experienced capture and imprisonment in Jordan for 11 months. He married and started a family and has been speaking about his experience for over half a century. We were fortunate to have the opportunity to spend time with him.

This second year of the project strengthened our partnerships and connected US and Polish students through the work of preserving the memory of the Jewish community in a small Polish town. As one local partner commented,

“This project is not only about Jews who used to live in Brzesko, it’s also about educating young people in the most important values and giving back to the city the part of its history which was almost forgotten.”

The trip proved essential in affording students the opportunity to travel to Poland, engage in meaningful dialogue across borders and contribute to the ongoing preservation of Jewish history in Poland.

The project has generated local interest and strong local support in Brzesko, where Mayor Tomasz Latocha hosted the students at the Goetz Palace for dinner and discussion about the project and ongoing cooperation after the student group returns to the US.

This program was made possible by a generous grant from the Blumenthal Foundation.