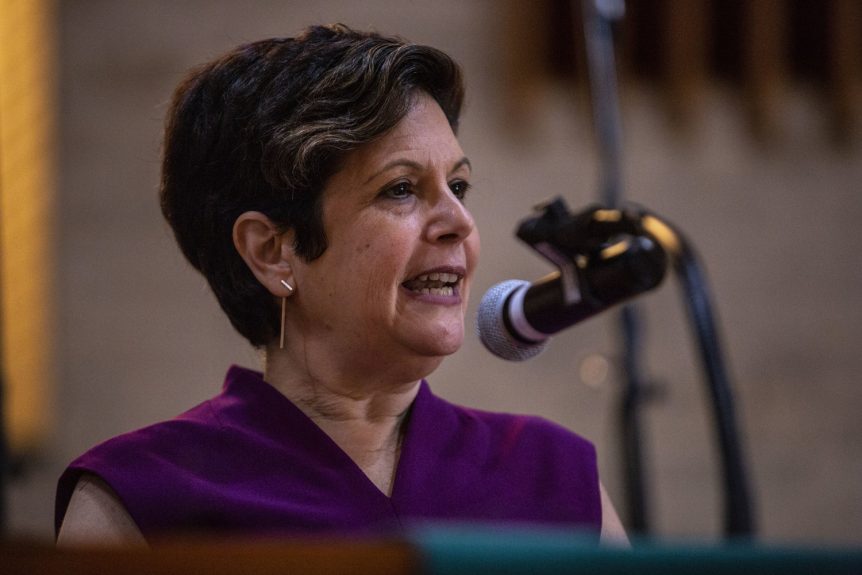 Judy Seldin-Cohen is the latest to join a long line of Charlotte Jews recognized by the non-Jewish community for their active civic engagement. On October 29, Judy Seldin-Cohen will receive the 2020 Lifetime Advocate Award from the YWCA Central Carolinas for advancing social justice in the Charlotte community and exemplifying the Y’s mission of eliminating racism, empowering women, and promoting peace, justice, freedom and dignity for all people.

Kirsten Sikkelee, CEO of YWCA Central Carolinas, says, “The YWCA’s mission is advanced by people of all faith traditions, and Judy Seldin-Cohen is a shining beacon of hope, demonstrating faith in action of the Jewish tradition.”

For nearly 150 years, Jews have made it their priority to lead and to lift up the city of Charlotte. In 1879, Samuel Wittkowsky was the first Jewish president of Charlotte’s Chamber of Commerce.  In the 1940s, I.D. Blumenthal brought Brotherhood Week, a program of the National Conference of Christians and Jews to Charlotte and along with his brother, Herman, purchased and dedicated the mountaintop retreat of Wildacres to the “betterment of human relations.” The list of Jews who are known, valued, and celebrated for uplifting Charlotte is long – Harry Golden, Arthur Goodman, Sr., Al Rousso, Mark Bernstein, Sandra and Leon Levine, just to name a few.

Civic Engagement is a longtime Jewish value. 2600 years ago, the author of the book of Jeremiah foresaw the time when the Jewish community would be dispersed. He urged his co-religionists to work for peace and prosperity in the cities to where they would be exiled, because with their city’s peace, they too would find peace. Jews have always recognized their interconnectedness with the greater community.

Civic engagement is a present-day value. A recent study, “Connecting the Dots: American Jews and Civic Engagement,” published in February 2020 (immediately prior to America’s COVID crisis and months prior to the racial justice protests), affirmed what Charlotte Jews have historically known to be true.  American Jews are highly engaged in their communities, even when it is not a presidential election year. A vast majority of American Jews see Jewish values as grounding their engagement in democracy and in their communities, though most also see their civic engagement as grounded in universal values, as well.

Like Jews nationally, Judy Seldin-Cohen’s civic engagement was inspired by her Judaism and by her work with Temple Beth El.  After bringing turkey casseroles to Temple Beth El’s Room in the Inn and Beth El’s program for homeless shelter on Christmas, and scrubbing a bathtub at the vacant uptown Charlotte Hall House Hotel so it could temporarily be used to house the overflow of homeless families, she recognized the need to go upstream. She desired not only to alleviate the hardships of homelessness but to eradicate its root causes by working for systemic change.

For more than twelve years she has done just that.  Judy has dug deep to expand housing for Charlotte’s homeless and low-income population. She helped produce award winning documentaries on social justice issues. She co-authored a book guiding synagogues on the path to civic engagement that received a National Jewish Book Award.  Most impressively, she led to visioning and establishing the $26 million dollar A Way Home Endowment that helps Charlotte-Mecklenburg’s homeless and at-risk families move toward housing and financial independence by providing housing subsidies and supportive services (an effort she currently chairs).

Seldin-Cohen recognized that while one voice can make a difference, organizing and training others to use their voices in advocacy can go much further. As a volunteer organizer with the Stan Greenspon Center, she built power by partnering with other organizations engaged in similar advocacy and meeting nearly 20 times with members of the Charlotte City Council. This work led the way to winning a $50 million housing bond referendum and a greater share of new housing units funded for the lowest income housing rentals.  Due to her leadership, thousands of low-income Charlotteans now have a place to call home.

“While the numbers of citizens in the Charlotte Jewish community are small, their impact on our civic life is large and mighty. As a champion for social justice, Judy Seldin-Cohen is one of the small and mighty. She leads the list of Jewish champions who in their actions and deeds have taught me the ethical obligation in the word tzedakah — a way of living I have come to embrace in my own life.” – Michael Marsicano, President and CEO of Foundation For The Carolinas, the sixth largest community foundation in America