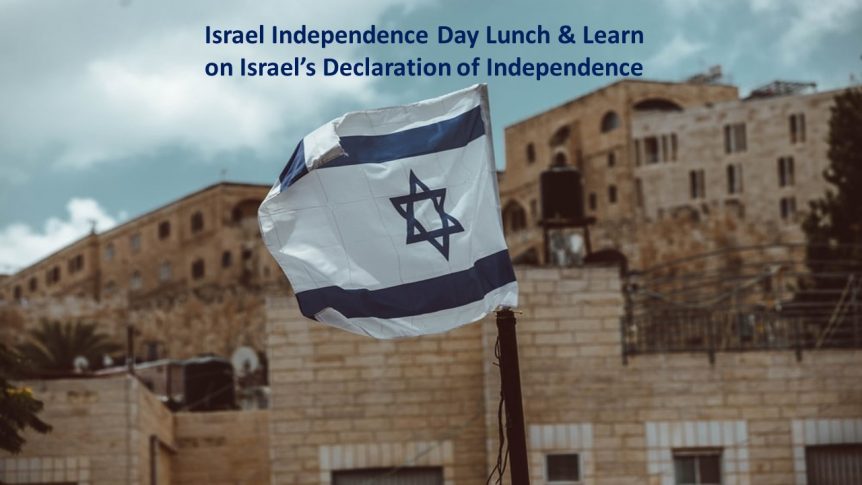 Join us for a Yom Ha’atzmaut, Israel Independence Day Lunch & Learn focused on Megillat Haatzmaut, Israel’s Declaration of Independence, the visionary foundational document of the State of Israel. The program will take place on Wednesday, May 4, 2022, from 12:30 to 2:00 pm at Shalom Park.

Utilizing the Rabbis for Human Rights 2014 publication called Masechet Atzmaut – Tractate Independence, with forty pages of rabbinic commentary, we will explore the text of Israel’s Declaration of Independence. What does it say? What kind of State does it envision? Where has it succeeded and how does Israel need to continue to evolve? This program will be led by Rabbi Judy Schindler, Sklut Professor of Jewish Studies at Queens University and Tair Giudice, Chief Impact Officer.

This program is co-sponsored by the Jewish Federation of Greater Charlotte and Stan Greenspon Center A light Israeli lunch from Yafo will be provided. For more information, contact Rabbi Judy Schindler, schindlerj@queens.edu.

The process of drafting the Declaration of the Establishment of the State of Israel (usually known as the Declaration of Independence) took place over a period of some three weeks in the spring of 1948 (5708). The authors produced a fascinating text despite the limited time available to them and the War of Independence that was already raging. The document before us is a multifaceted one. It blends the sacred and the profane; sometimes it has the character of a dry legal text, while in other sections it verges on prophetic poetry. The final form of the Declaration of Independence was preceded by numerous drafts. The arguments that took place among those involved in the process of writing the document reflect an attempt to address the most fundamental questions of Zionist values – questions
most of which continue to preoccupy Israeli democracy to this day.

The Tractate Independence project was conceived over ten years ago, when Israel marked its jubilee year. Rabbis for Human Rights sought an original way to mark this special occasion that would reflect the mission and message of the organization.