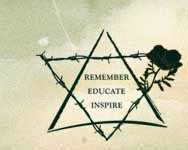 March was a great month for the Greenspon Center Holocaust Education team. We brought our Becoming One Human Family program to three middle schools and one high school this month. The students learned not only about Walter Suskind and his amazing resistance and rescue in Amsterdam, they also learned about one another and building stronger community.

We were proud to partner with the Rowan-Salisbury school system as they held their second annual Holocaust and WWI Symposium for all the 7th graders in those counties. We brought eight speakers to the symposium and reached 2,000 students. Topics included Judaism 101, Memorials and Memory, Civil Rights and Song, and Jewish Life Before WWII. The event culminated with a keynote address from Jackie Fishman, second generation Holocaust survivor and master educator.

We have two incredible programs scheduled in partnership with Centropa, the Levine Jewish Community Center and the Hanns Seidel Foundation of Washington and Munich. Through a Deutschland Jahr 2019 grant of the German Embassy in Washington, we will host two days of lecture and film.

On April 16, a session titled “Germany Today, Facing the Past and the Future of Memory” will take place at the Sam Lerner Center for Cultural Arts at the Levine JCC at Shalom Park.

On April 17, we invite educators and the community to join us for “Teaching the Past in the Future: Using Personal Stories in Holocaust Education.”  We will focus on perspectives including those from Greensboro, Charlotte, Vienna, and Munich. The program will take place in Ketner Auditorium on the Queens University of Charlotte campus. For more information, please click here.

We end our month with a one-of-a-kind event. On April 28th, we will host a NC Premier of the film “Close to Evil,” followed by a discussion with author and international speaker, Alexandra Senfft.

“Close to Evil” traces the journey of one Holocaust survivor as he reaches out to the daughter of a Nazi who worked at the camp where many of his family members were killed. Along the way, he meets Alexandra. Alexandra is the granddaughter of a Nazi. Hanns Elard Ludin was Alexandra’s maternal grandfather. Ludin joined the Nazi party and the SA-storm troopers in 1931 and became the German envoy to Slovakia. He was found guilty of being directly involved in the deportation of some 70,000 Jews. He was hanged for war crimes in 1947 in Bratislava, Slovakia. Alexandra speaks about the lasting legacy of silence on the descendants of Nazi perpetrators as well as the need to seek forgiveness and reconciliation. For more information and to register, please click here!