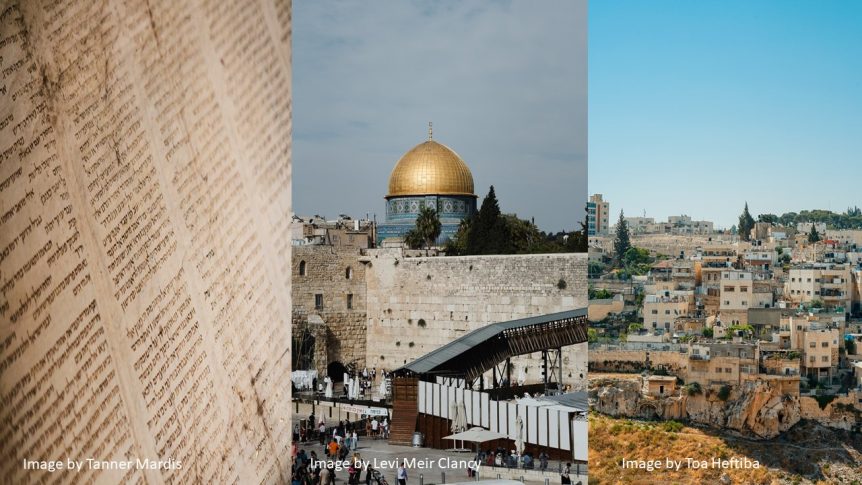 Jewish Studies and the Jewish Federation of Greater Charlotte Present “Jewish Values and the Israeli-Palestinian Conflict,” a 12-Week Course on Wednesdays, 12:30 to 2:00 pm, from September 1 through December 15. (There will be no class September 8 through September 29 due to Jewish holidays and November 30)

We are excited to get back to learning by addressing contemporary issues.  Conversations across the Charlotte community during summer 2021 made it clear that both our Jewish and broader Charlotte community wanted and needed greater depth in their understanding of the Palestinian-Israeli conflict. We have chosen a first-rate curriculum from the Shalom Hartman Institute (an exceptional center of Jewish pluralism and learning) to serve as the foundation of our course. Through the study of Jewish narratives about Israel and the unpacking of the complex meanings of peace in Jewish tradition, participants are invited to explore the ideas and values that animate different attitudes toward the conflict and how these values might shape their own political understandings. Although participants hold a variety of political viewpoints, this course strives to achieve a shared respect for our differences.

Rabbi Judy Schindler, Sklut Professor of Jewish Studies at Queens University, and Tair Giudice, an Israeli-American, with more than a decade of experience in Jewish communal leadership and Jewish education with the Jewish Federation of Greater Charlotte will co-lead this class. This course will be offered with a hybrid format. Our goal is to have most sessions in person with all classes accessible to those who are learning from a distance. All sessions will be recorded.

September 1 – Talking About Israel: Foundations for a Values Discourse explores the range of attitudes toward the Israeli-Palestinian conflict across the Jewish world, emphasizing the different values and moral claims that lie behind each core position along the spectrum. The unit seeks to frame and establish the basis for a values discourse about the conflict in which different positions are understood in values terms.

October 6 – The Current Discourse: Living with Difference examines the sociological categories of pluralism, tolerance, and deviance and their reflection in Jewish sources to gain an understanding of the ways in which Jewish communities can accommodate difference and develop strategies of acceptance and belonging.

October 13 – The Israel We Imagine addresses the most essential narratives and assumptions that the Jewish community holds about the Israeli-Palestinian conflict. An understanding of differing positions, resulting from differing visions and aspirations, can foster a richer and more tolerant Jewish discourse about the conflict.

October 20 – Jewish Narratives on Peace explores different models of peace within Jewish sources and the way they affect ideas about a resolution of the Israeli-Palestinian conflict. Peace is one of the principal aspirations of the Jewish people featured in teachings and prayers, but what type of peace are the Jewish people praying for?

October 27 – Attitudes Towards the Land – Perspectives from Within Israel examines the historical and religious significance of the land in Jewish sources and the way this range of perspectives shapes the attitudes of many Jews, especially those in Israel, towards the Israel-Palestinian conflict.

November 3 – Attitudes Towards the Land – Perspectives from Outside the Land explores Diasporic conceptions of the place of land in Judaism and how they shape the way one views the Israeli-Palestinian conflict.

November 10 – Justice explores the central meanings and implications of justice within the Jewish religious tradition and the impact that these understandings have on Jewish understanding of moral responsibilities toward the conflict and its resolution.

November 17 – Justice: X Happened looks at the claim that a wrong was perpetrated as part of Israel’s establishment and the ways in which this kind of controversial claim can be addressed in a genuine and morally appropriate manner.

November 23 – Self-Preservation explores the core moral commitment to self-preservation in Jewish tradition and its impact on the way many Jews think about the conflict.

December 1 – Compromise examines the ways in which the Jewish religious tradition views the idea of compromise, its relationship toward justice, the way it interacts with self-preservation, and how it shapes political and moral perspectives on the Israeli-Palestinian conflict.

December 8 – A Light Unto the Nations: The Idea of Exceptionalism analyzes the core concept of Jewish exceptionalism from within the Jewish tradition and how this idea can impact positions regarding the Israeli-Palestinian conflict.

December 15 – Concluding Conversations – Living with Competing Values shared video reflections bringing together iEngage faculty members to discuss how they synthesize the different values addressed in the series. The session models a conversation about the conflict in which values and ideas, rather than politics, take center stage.

This course is presented by Jewish Studies at Queens University and the Jewish Federation of Greater Charlotte. The cost per person for this extended class with two instructors is $325 and includes an online sourcebook with primary sources relevant to each lecture as well as background reading. Proceeds support Jewish Life at Queens University. Space is limited. We do not want costs to be a barrier. For more information, to register, or for financial assistance contact Talia Goldman, goldmant@queens.edu.